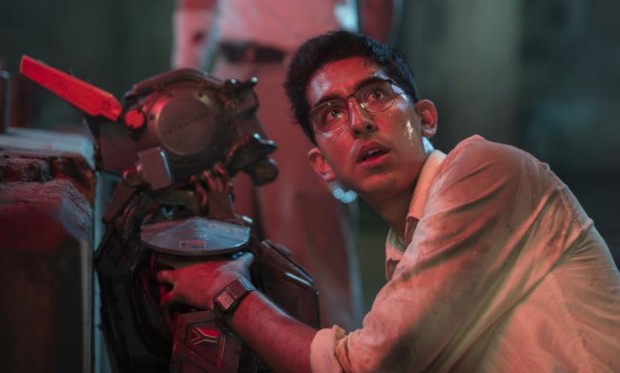 ‘Chappie’ Movie Review: Cute Robot Movie Could Use A Tune Up

Just how much of “Chappie” is supposed to be homage if almost everything in the movie feels like I’ve seen it before? “RoboCop,” “Short Circuit” and even “A.I.” have been cited as inspirations for “Chappie,” but they’re so prevalent in parallels, it feels like elements are directly lifted. A police force and armored weapon that looks straight out of “RoboCop,” an innocent robot learning about the unwelcoming world around him like in “Short Circuit” and “A.I.” How far from a source that inspires a filmmaker should he keep if he wants to avoid repeating someone else’s stories?

“Chappie” is not all gloomy rehash. Director Neill Blomkamp is clever enough to insert his South African background and style to make the story interesting to unfold. Deon Wilson (Dev Patel) is the successful engineer behind South Africa’s fleet of police robots. However, what really interests him is his consciousness program that would allow for his robots to become sentient and think for themselves. He’s kidnapped by debt-ridden gangsters (Ninja and Yo-Landi Visser) in need of “one last job” to pay off their debts, and they see Wilson’s experiment, Chappie, a defunct police robot doomed to die as his battery runs out, as their ticket out.

Wilson’s jealous mullet-rocking colleague Vincent Moore (Hugh Jackman) has a robot of his own (it may also look familiar to “RoboCop” fans as well) but its production is stymied by the success of Wilson’s fleet. Moore sets out to prove his robot’s worth at Wilson’s expense. Sigourney Weaver takes over Jodi Foster’s bad lady boss part from “Elysium” and gives Moore the order to kill the rouge robot. Chappie must now fight to save the lives of his beloved family fast or face his own destruction.

Blomkamp’s messy style does a disservice to the quieter moments in “Chappie” and Copley’s best Andy Serkis (Gollum from “The Lord of the Rings” series) impression. And the director makes some very interesting choices with his characters, giving Wilson very little in his life other than Chappie. Meanwhile, Moore has a military background and an ardent devotion to Catholicism which makes his panache for violence Crusade-like. Just like Copley’s character in “Elysium,” the bad guys in Blomkamp’s movies are more interesting than the good and at the root of all evil is capitalism.

Die Antwoord rappers Ninja and Yo-Landi Vissar play pastel-dipped “Mad Max” versions of themselves as desperate gangsters looking to settle their debt. A less nuanced performance comes from actor Jose Pablo Cantillo, who I can only imagine is eyeing the kind of gangster role in “Drive” that propelled Oscar Isaac’s career. Otherwise, it’s cringe-worthy to watch him give Chappie cholo lessons. Aside from Dev Patel, there are no other major characters played by actors of color in a story set in South Africa. This casting problem has plagued Blomkamp’s previous films as well, though I had hoped his inclusion of Diego Luna in “Elysium” pointed to better inclusion, but Dev Patel in “Chappie” is still just another supporting actor.

Read more: ‘Chappie’ Movie Review: Cute Robot Movie Could Use A Tune Up