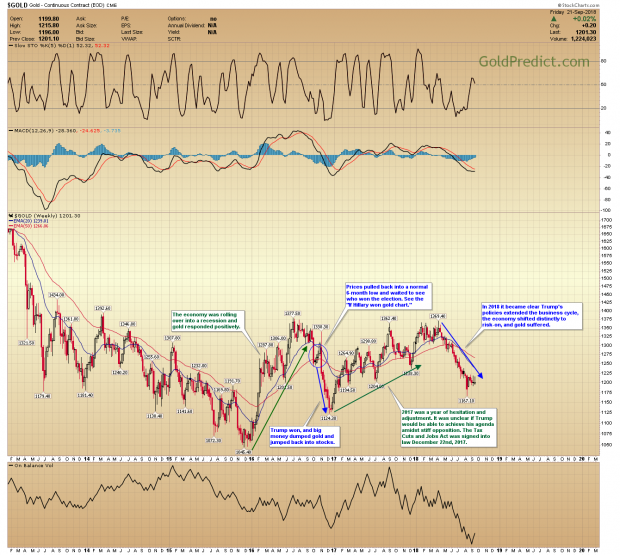 It’s time to revise my big picture outlook for gold. I don’t believe gold is entering a new multi-year bear market nor do I think prices will drop to $700. I believe the bull market was merely suspended and lower prices should be bought. There is a massive financial storm on the horizon, and gold will benefit greatly in the years to come.

Between the 2018 tax cuts and the federal budget increase, the US economy gained nearly 2-trillion dollars in stimulus. That’s a lot of money. In comparison, it took the same amount (about 2-trillion) to arrest the 2008 financial crisis. Trump’s efforts extended the business cycle and postponed golds bull market.

As I stated in the “Trump Effect” article, the economy was rolling over into a recession in 2016. Smart money saw this and gold responded. Prices rallied over $300 by July 2016 (see chart below). The major turning point arrived after the 2016 election. Trump won, and big money immediately dumped gold and jumped into stocks. Precious metals hesitated in 2017 as the outlook for the economy remained unclear. The tax cuts and jobs act was signed into law December 22nd, 2017 and the massive stimulus package gained traction this year. The economy shifted back to modest growth and risk-on with consumer discretionary stocks leading the way. 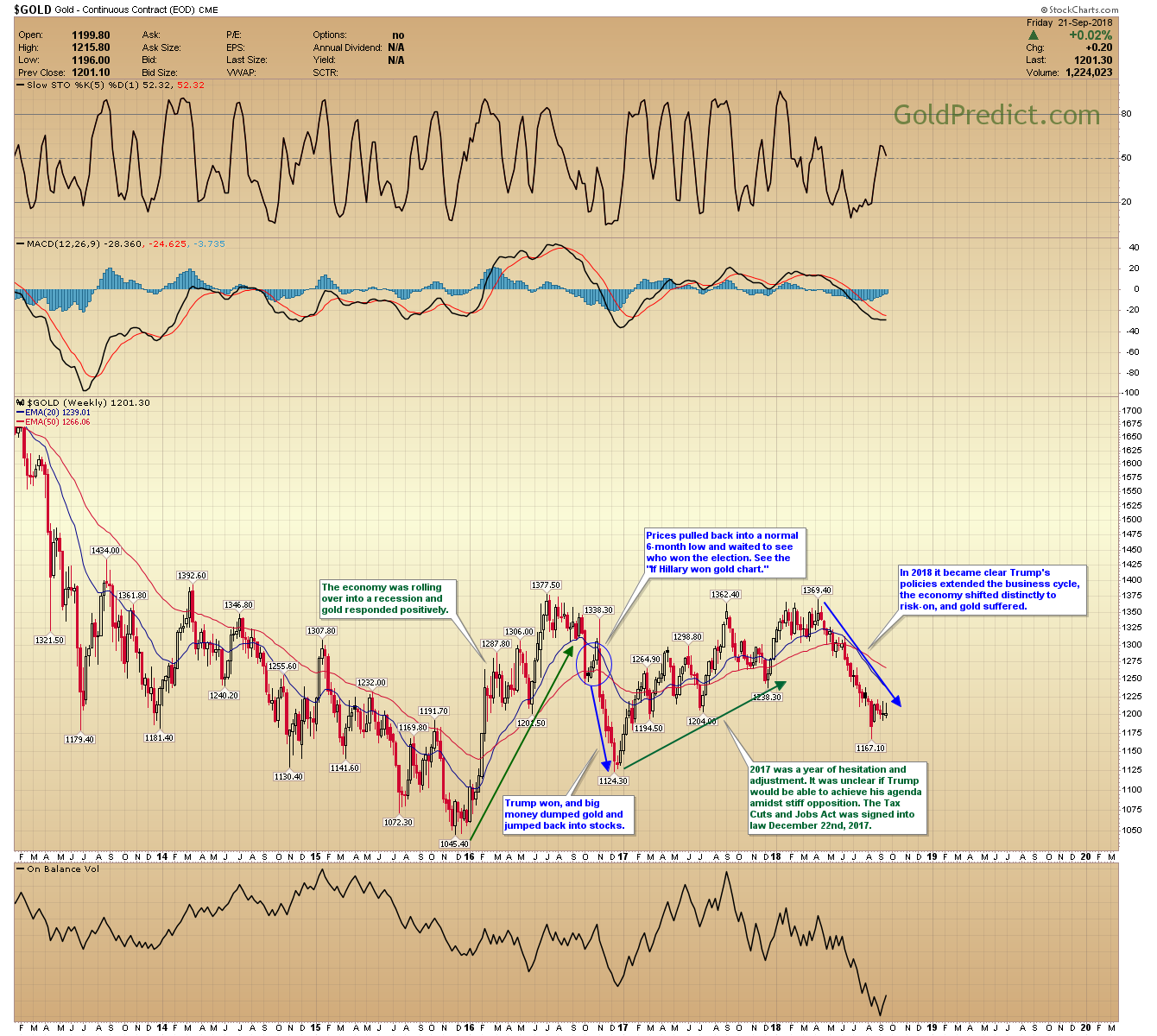 Had Hillary won, the economy would have continued into a recession and gold would be much higher. 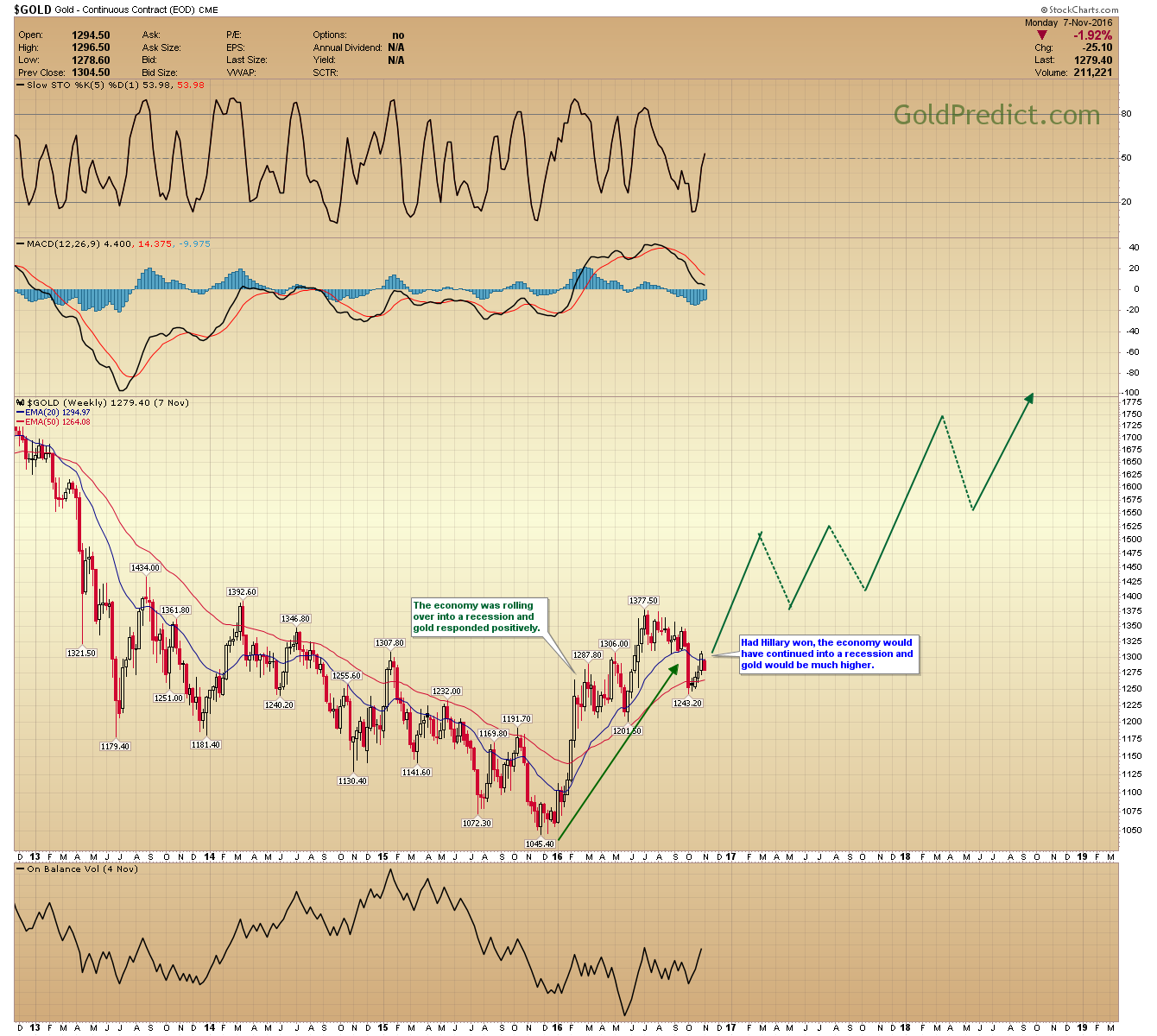 So what does this mean for gold investors? The stimulus package postponed an economic recession by a couple of years. However, it will probably make the next downturn much worse. I see the potential for a perfect storm of events that will likely snowball into a massive crisis by 2020/2021. That is when gold will begin to shine.

Passive investing is at record levels. Investors simply buy the index and outperform most managed funds. This strategy is distorting stock market gains and valuations. Let me explain, if SPY receives 100 million dollars it distributes that money according to market weight. So without discretion, they put $4,348,817 into Apple, $3,508,018 into Microsoft, $3,147,969 into Amazon and so on. No fund manager worth his salt would be pouring money into Amazon with a P/E ratio at 152. Valuations don’t matter, as long as money keeps pouring into the indexes they have to buy these stocks.