Debt default contagion fears seem to surface every decade. Rolling debt bubbles in the 1980’s from Latin America led to billions in handouts from the first -world banking system. The Asian currency default contagion among the Asian tigers was eventually contained in the late 1990’s. More recently the more menacing US sub-prime mortgage debt default triggered the Great Recession of 2008-2009.

The sluggish recovery from those ashes has kept Europe in continual panic-refresh mode every few years as they attempt to ring fence the unstable debt markets of its weaker sisters, primarily Greece and Italy. With the third largest European economy heading into its third debt crisis in 10 years, fears of Italian default have surged in October.

Past Euro debt scares have triggered a flight to quality toward US Bonds, sending our yields lower. With the US economy expanding rapidly and the Fed pushing short term rates higher, it will take a very high Italian risk premium spread to trigger a sharp drop in our Treasury yields. We suspect it will take a 400 to 600 basis point spread of Italian bonds over German bunds before US yields fall sharply on fears of a serious contagion. This should also be a zone where US rates will be falling, sending our Bond prices higher, in spite of the Fed automatons raising short term rates every 4 months. 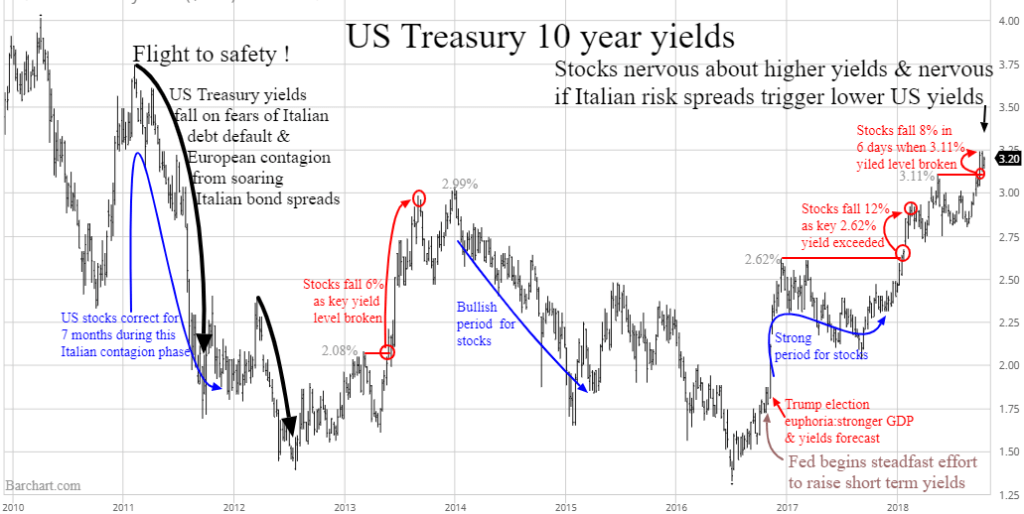 Stocks are stumbling lower since their intoxicating record high of October 3rd with sunshine in the rear-view mirror and clouds moving in from every other direction. Rising geopolitical risk from slowing growth outside the US, Trade War tension inhibiting global exports, a slowing China, Italian default potential and sky-high US earning comparisons in 2019 are all headwinds to watch closely.

Add to this an opposition party vowing on November 6th a campaign pledge to drain Trump’s economic punch-bowl, rolling back tax cuts and impeaching the President, and you have a target rich environment for investment landmines. However, it’s always good to ask, what if there are positive resolutions to these hurdles? When the dust settles there is virtually 0% odds of Trump’s impeachment or tax changes with supermajority thresholds required; Italy will not be allowed to fail; and China, Europe, and others will stimulate as needed to prevent a panic. A further scare may arrive first, but this will only popularize the resolve for new stimulus efforts from around the globe and a value entry for equity investors with renewed economic acceleration down the road.