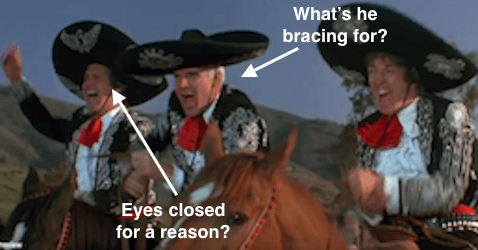 We began the Amigos theme last year in order to be guided by the goofy riders during the ending stages of a cyclical, risk-on phase that was not going to end until the proper macro signals come about, no matter how many times the bears declared victory along the way. The fact that grown adults see conspiracies around every corner (okay, I see them around every third corner myself, but work with me here) makes such macro signaling very necessary in order to keep bias at bay.

The picture above shows Amigo #1 closing his eyes and bracing for impact, just as Amigo #2 did many months ago. Amigo #3 is the dim one (I mean, Martin Short with Steve Martin and Chevy Chase? Come on) happily riding along, his star shining less brightly than the other two. He is still a macro holdout.

Let’s get to our review.

SPX/Gold Ratio (daily chart) took a hard hit and has bounced a bit. If this were a stock chart we’d call it a bear flag. As it is we call it a hard lurch toward a risk ‘off’ situation that does not look complete.