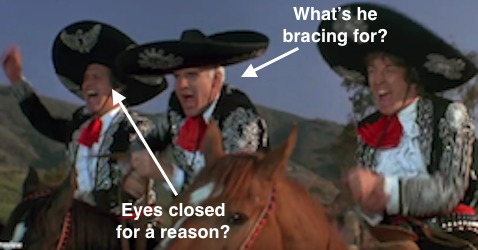 As The Macro Turns…

We began months ago, noting the 3 Amigos destined for their goals. Here’s a post from November 2017 explaining the macro fundamentals involved:

Updating the 3 Amigos of the Macro

As we’ve noted, the two star Amigos (Steve Martin & Chevy Chase) were bracing for a smash against the yield Continuum ™ limiter and the conspicuous weakening of stocks vs. gold since February. The Martin Short Amigo is goofier, and on his own schedule. He’s a lesser light, after all. The two stars are making the headlines.

Beginning with Steve Martin’s character, the 30yr yield Continuum ™ hit the 100 month EMA ‘limiter’ and reversed. This does not have to be a long-term reversal. The point was for yields, which had been riding higher with stocks and risk ‘on’ assets, to hit and reverse or consolidate. What comes next is open to new analysis. We’d been expecting yields to rise to these limiters since last October and they have done so.

So in October and November we planned for yields to rise (bonds to decline) but in Q1 2018 as heavy hitting experts like Bill Gross, Ray Dalio and Paul Tudor Jones were proclaiming “bond bear!” right at the yield limiters while the CoT and sentiment profiles were positive for bonds, a consolidation (at least) was in the bag. Again, this indicator is now history and we move to the others.

While the major trend is still up in SPX/SPY vs. Gold/GLD, the daily view shows why Chevy Chase has his eyes closed. Amigo #1 is not painting a pretty picture in 2018. At some point this negativity would turn the long-term trend down.