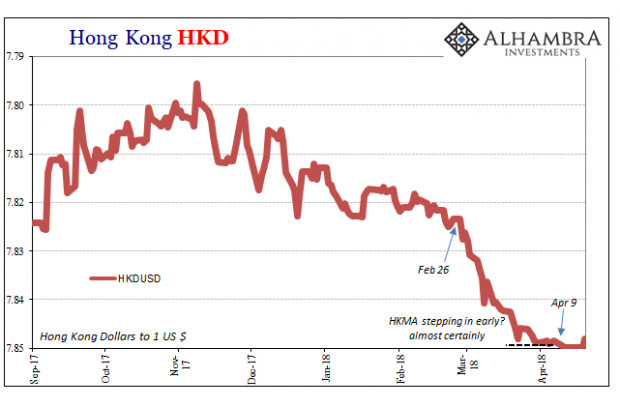 Yesterday for the first time in over a week, HKD moved. That’s not unsurprising, as we should expect that nothing goes in a straight line – even devaluation of this kind. The issue is more about why it might have moved, or what it cost to move it.

The Hong Kong Monetary Authority (HKMA) had started carefully. They were only buying HKD in small amounts at first. This week, however, they stepped up their operations. Through April 18, HKMA had sold $4.3 billion in US$ reserves, half of that total on the 17th and 18th alone. Today, the monetary board acting now as de facto central bank has sold $2.2 billion more. 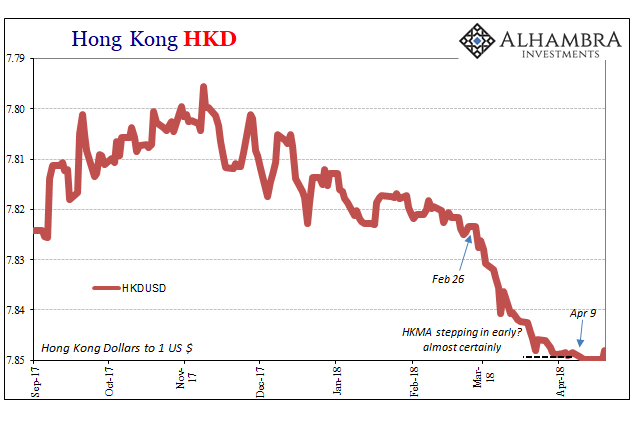 There have been 13 operations and $6.54 billion already spent. It’s a drop in the bucket compared to the level of forex reserves in HKMA’s exchange fund. As of March 31, the authority reported HKD3.24 trillion in foreign assets, net of HKD352 billion of liabilities (repos and securities lending arrangements). That’s about $412 billion.

Given the size of the stockpile, most media commentary is of the same comforting tone – nothing to worry about. It’s this laziness that is most frustrating, as if nothing interesting has happened over the last decade with regard to central banks making the same claim. You would think that the media would notice how many times central bankers have been unshakably reassuring only to be severely shaken themselves (China and CNY being a pretty relevant recent example).

Maybe the fact that we are talking about Hong Kong makes a difference this time. After all, the whole point of HKMA was its stability, and the predictability of its monetary and financial arrangements.

Over the years, the HKMA was tested a few times, especially during the Asian flu of 1997 and 1998. Unlike its Asian neighbors, Hong Kong never came close to devaluation and economic destruction, even as China took over sovereignty amidst its own Asian flu symptoms.

It earned the HKMA and its HKD currency a quality that is so often unappreciated in modern times: boring.