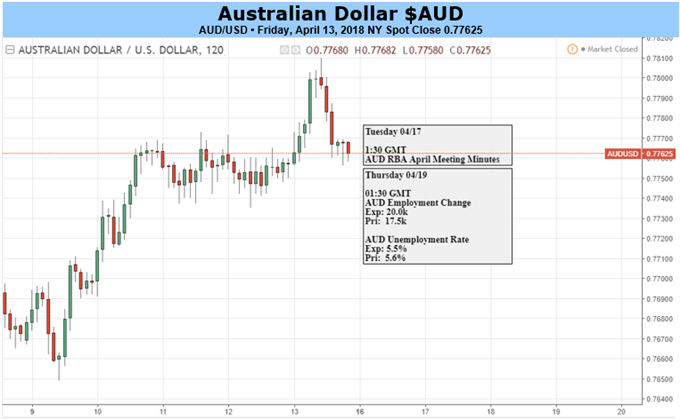 The Australian Dollar showed little reaction to a broadly stronger set of Chinese trader figures Friday, perhaps because the ongoing tariff spat between Washington and Beijing has rendered them less useful as a likely gauge to the future.

The overall trade balance for the first quarter came in at CNY326.18 billion (US$51.9 billion), hugely ahead of the CNY 181 billion expected. Imports soared by 11.7%, compared to the same period last year while exports’ 7.4% rise was below the previous quarter’s gain. These look like quite strong figures for the first quarter, with little obvious trade disruption evident from the long Lunar New Year break.

However, that trade dispute with the US could see these data series weaken into the next quarter, absent a resolution which seems elusive at present. It is notable that China’s trade surplus with the US increased by 19.4%.

The Australian Dollar sometimes plays the role of liquid China-market proxy but did not obviously do so on Friday morning in the wake of these figures. The currency remains in thrall to overall global risk appetite and the data impact may have been blunted not only by the China/US trade spat but also by a cooling property market which could see Chinese demand for imported raw materials fade as the year goes on.

On its broader, daily chart, AUD/USD is taking a shot at the top of the dominant downtrend channel which has marked trade for most of this year. A broad revival in global risk appetite has taken the currency higher, but the ongoing broad interest rate differential in favour of the US Dollar continues to hang over the Aussie.