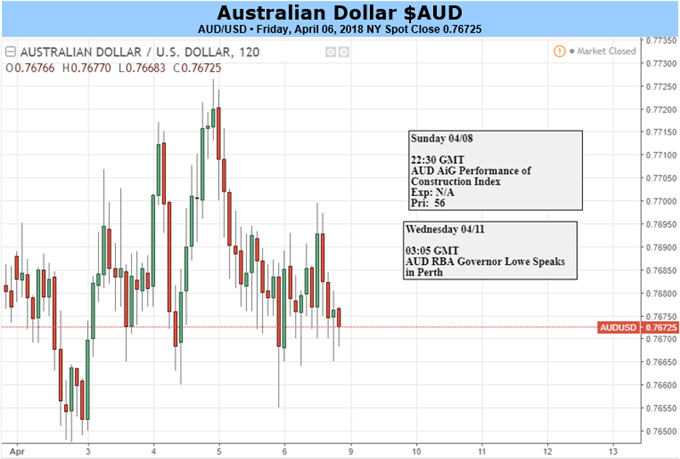 The Australian Dollar remains horribly liable to collateral damage from trade headlines emanating from the US and China. They can further cloud a backdrop already dimmed (at least if you’re a bull) by clear bias lower in AUD/USD which has been in place for much of this still-young year.

The Aussie took a hit last Friday when US President Donald Trump ordered his trade advisors to target a further $100 billion in tariffs on Chinese imports, on top of the $50 billion already under consideration. This announcement came just as investors were increasing bets that the trade spat between Washington and Beijing might be cooling a little.

Australia obviously has vast raw-material trading links with China and so knee-jerk urge to sell the Aussie on such news is at least understandable, even if a deeper think might render it less so. Economists at Citigroup said last week that the Australian economy isn’t actually as trade-exposed as many others, and might do better than the likes of New Zealand, Singapore, India and China in just about all scenarios short of a full-blown trade war.

Still for now market reaction seems impervious to such nuance, and the currency seems likely to keep wobbling when trade risks come to the fore. More broadly AUD/USD remains in the daily-chart downtrend which has dominated proceedings since the highs of late January.

The Australian economy is revving quite nicely in some areas, notably the manufacturing sector where activity hit a record high last month according to the latest Purchasing Managers Index survey released last week. Australian trade is also doing pretty well.

But overall it seems stuck in a neutral gear, and the Reserve Bank of Australia certainly seems in no great hurry to lift the key Official Cash Rate from its 1.50% record low. That has been in place now since late 2016, taking the title of the longest unchanged base rate in Australian history. What’s more rate-futures markets don’t fully price in even a modest, quarter percentage point rise until April 2019- providing a bearish contrast with a Federal Reserve now well into its rate-hiking cycle.