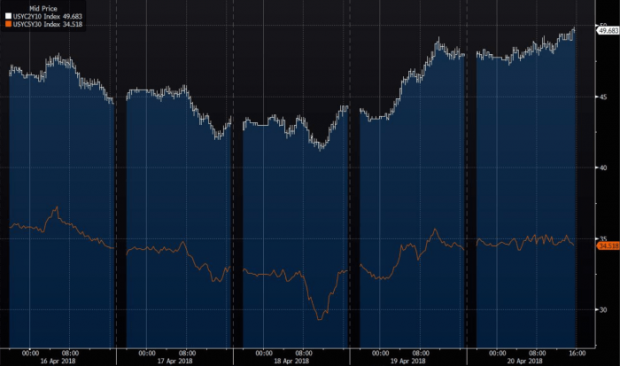 Behold: An ‘Incubator For Vicious Steepeners’

The latter part of this week was interesting to the extent the resurgence of the inflation narrative seemed to be at least partially responsible for a (probably fleeting) reversal of the previously inexorable flattening of the curve.

2s10s steepened for three straight sessions to close the week, rising from a mere 41bp on Wednesday – the smallest gap in more than 10 years. Still, as noted on Friday afternoon, on the whole there wasn’t anything too dramatic about the week:

The spike in commodities – catalyzed by surging metals prices on the heels of the Russia sanctions and the ongoing rally in crude – stoked inflation concerns and on Friday, 10Y yields surged to their highest levels since 2014, reigniting the debate about what happens when we hit the elusive 3%:

Are we set for a rerun of early February, when inflation jitters and bear steepening accompanied an acute risk-off episode and a spike in cross-asset volatility that left investors with few places to hide? Well, who’s to say in the very near-term, but for their part, Deutsche Bank thinks “the stability of the long end remains unshaken.”

That’s according to the latest from the bank’s Aleksandar Kocic, who notes the following in a note dated Friday:

Fiscal shocks, which started with bear steepening, are gradually migrating to the front end and the curve continues to bear flatten. In this way, the Fed is normalizing the curve and supporting the currency. As a result, supply is (always) finding a sponsor, and the long end of the curve benefits from any riskoff episode or portfolio rebalance. This is stabilizing long rates and, as consensus forms around the idea that a breakout from the range is becoming unlikely, backend volatility is gradually getting extinguished, which is reinforcing its stability further. Rates volatility is departing in all directions, to the short end of the curve and to other markets.