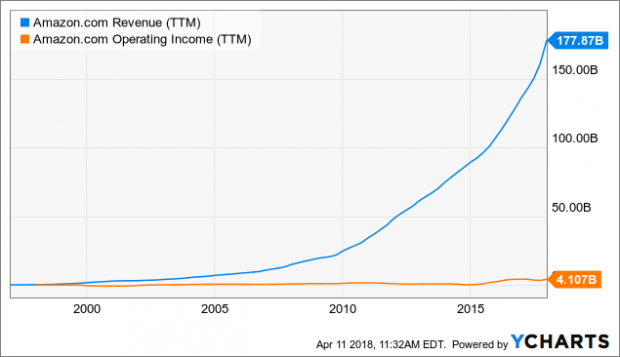 Amazon (AMZN) and eBay (EBAY) are long-time rivals in e-commerce, and they both offer some interesting traits for investors. Amazon is a disruptive force in the retail industry, and the company is positioned for continued growth in the years ahead. eBay comes way behind Amazon in terms of growth, but the business is far more profitable and the stock looks undervalued at current levels.

Amazon Is All About Growth And Competitive Strength

Amazon has a relentless competitive drive, and management is deeply focused on long-term growth, even if it comes at the expense of current profit margins. Amazon sells its products at competitively low prices to gain market share in a wide range of retail categories, and it’s also investing huge sums of money in areas such as building its distribution network and digital content.

Back in 1995, Amazon was making only $511,000 in revenue per year. Fast forward to 2018 and the company is estimated to generate $233.48 billion in revenue and growing at full speed. In the process, Amazon has consolidated its leadership position in online retail and cloud computing infrastructure, and the company is now also a big player in hardware and digital content.

Depending on which area of the income statement you focus on, this strategy can be described as a massive success or a complete failure: Sales are growing at an extraordinary speed considering the company’s size, but profit margins are low and volatile.

Amazon delivered $177.9 billion in revenue for 2017, growing 31% versus 2016. It takes a unique business to generate that level of growth from such a gargantuan revenue base. 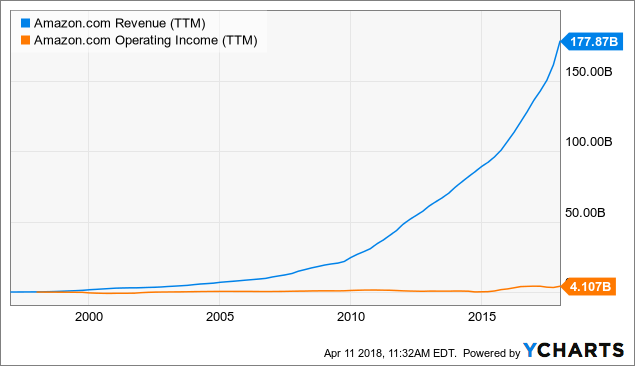