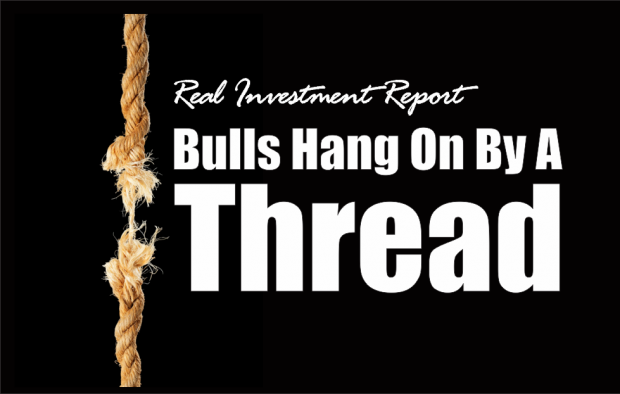 Bulls Hang On By A Thread 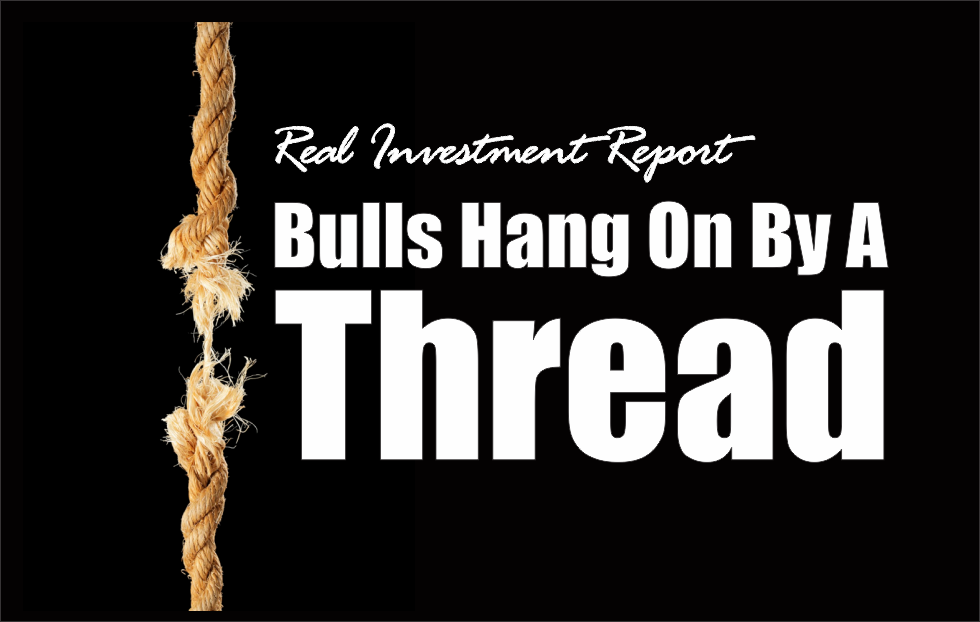 Over the last couple of weeks, not a lot has changed. Market internals remain poor, and “trade war” rhetoric from the White House continues to worry the markets. It also certainly didn’t help the situation on Friday when President Trump decided to calm the markets by saying:

“I’m not saying there won’t be a little pain so we might lose a little of it(stock market gains) but we’re going to have a much stronger country when we’re finished, and that’s what I’m all about.’

That wasn’t the reassurance the market was looking for.

As I discussed in “A Simple Method Of Risk Management:”

“The market always ‘prices in’ events or issues it is aware of such as economic data, earnings estimate changes, and even geopolitical events. In other words, it isn’t the thing that markets are aware of, but the unexpected event which sends traders, and algorithms, rushing for the exits.”

What is missed by the White House is that “trade wars” are not economically beneficial. It hurts producers with higher input costs which impacts profits margins. It also translates into higher prices on goods and services for consumers without a commensurate increase in wages which are suppressed by producers to offset higher input costs. It’s a vicious spiral. Companies who trade internationally, which is a much larger percentage today than it was back in the 1980’s, are also hurt by higher prices which leads to reduced demand.

Setting aside the economic threat for a moment, and focusing solely on the stock market, the risk of an acceleration in the “trade war” is a negative impact to exceedingly lofty earnings expectations over the next two years. The chart below shows the revisions to estimates as of the past 4-months. 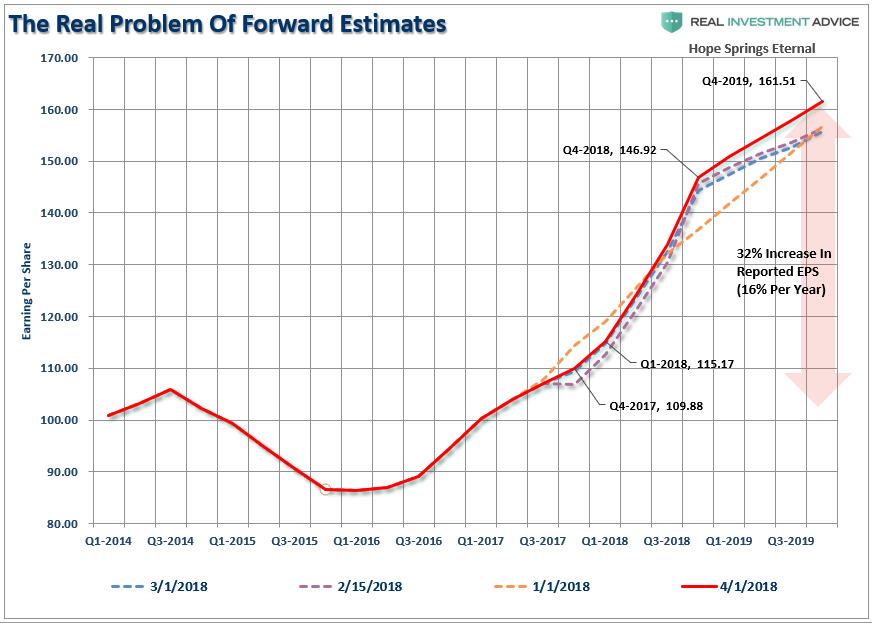 The market has already priced in much of this increase in earnings based on the recent tax-cut legislation. If those estimates start getting revised sharply lower, due to increased costs that can’t be passed along or by a stronger dollar, the negative revisions will weigh on asset prices.

What should be the most concerning about Trump’s statement, and as I addressed at length yesterday in the “Mind Numbing Spin Of Peter Navarro,” is that Trump is tied into a belief that is not supported by the economic “facts” at hand. This suggests he will continue down this path without regard to what the market is telling him.

The issue, of course, is that while Trump states we might have to put up with a “little pain”, it is the risk of a market decline that: 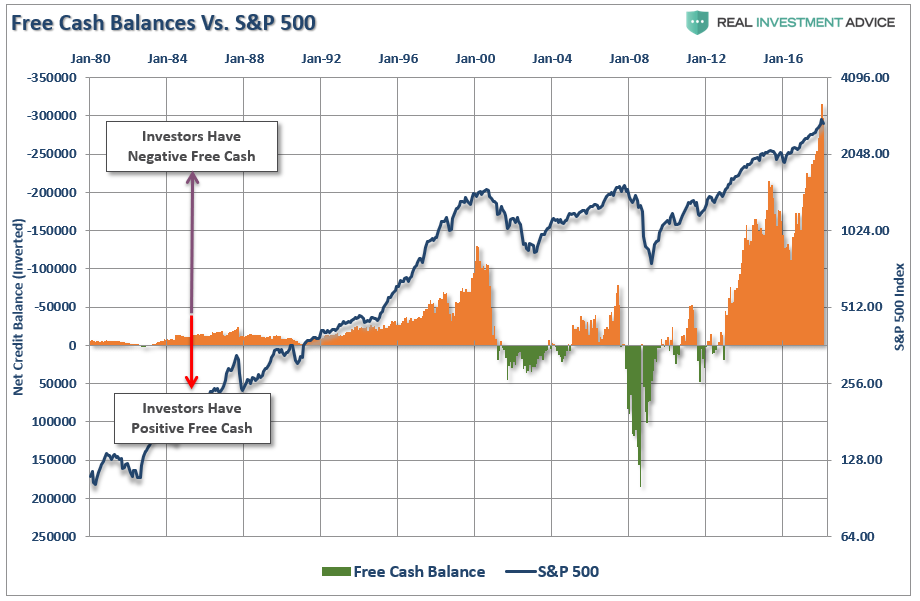 In other words, a “little pain” could quickly turn into an “agonizing amputation” if Trump isn’t exceedingly careful.

But with that said, the market has, so far, hung on to its support at the 200-dma as shown below. 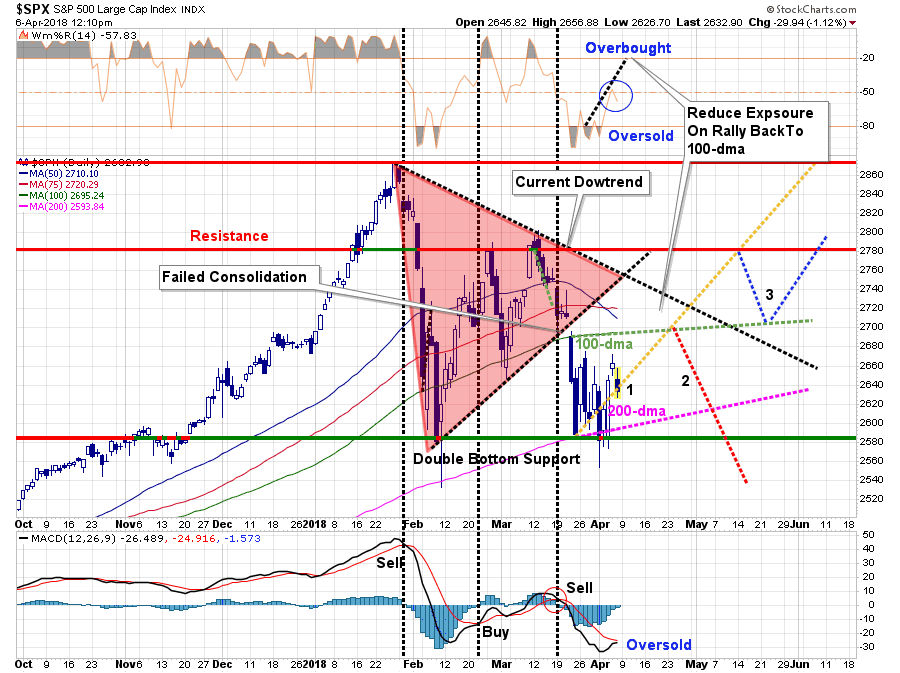 More importantly, we continue to trace out the “reflexive rally” path I laid out previously (Option 1).  As I stated last week:

“However, my guess is we are not likely done with this correctionary process as of yet. It is this pickup in volatility where the majority of emotional, or behavioral, mistakes are made.

From a very short-term perspective the backdrop has improved to support a continued reflexive rally next week:

With this setup, the possibility of more constructive action next week has risen.”

That “more constructive action” statement, while true, certainly left a lot to be desired.

The problem that now arises that the majority of the short-term oversold condition, which supported the idea of a “reflexive rally,” has largely been exhausted. While the improvement short-term suggests a further rally into next week, the 100-dma, as a target to further reduce equity and risk related exposure, is becoming more tentative.

Of course, there are a lot of things that could go wrong as well, so having a plan to react quickly remains key.

(I have repeated the equity reduction process over the last two weeks. However, if you are new to the newsletter, welcome and click here to read the previous instructions on portfolio rebalancing.)

As I stated last week, we currently are overweight cash in portfolios currently, but have NOT made our next adjustment lower as of yet. This is because, as noted above, our target levels for a retracement have not been fulfilled, nor has support been broken.