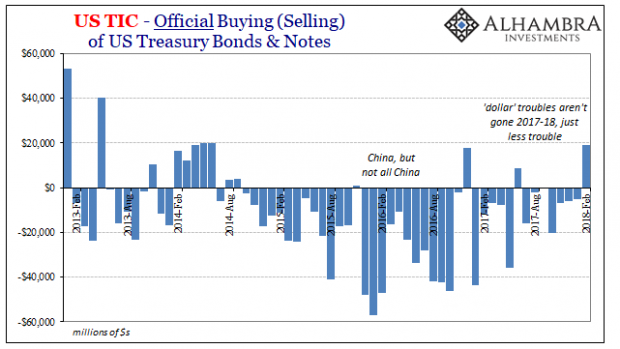 Can We Blame Japan For The Liquidations (And HKD)? Right Now It Sure Seems That Way

February was a very interesting month, wasn’t it? There was the pause or even end of the inflation hysteria driven home by “unexpected” liquidations in markets all over the world. On top of those, LIBOR-OIS blew out and all the absurd explanations put forth for it, and even outright lies. Needless to say (write), I’ve been waiting for the TIC update with a little more anticipation than usual.

The numbers for February 2018, released this week, did not disappoint.

To begin with, there was heavy buying, not selling, in UST’s among global central banks during that particular month. That is contrary to what we might expect in times like these; official accounts have tended to “sell UST’s” when global “dollar” funding conditions get too tricky. They were that two months ago. 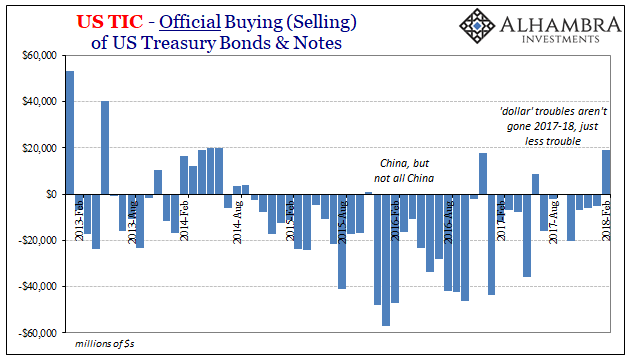 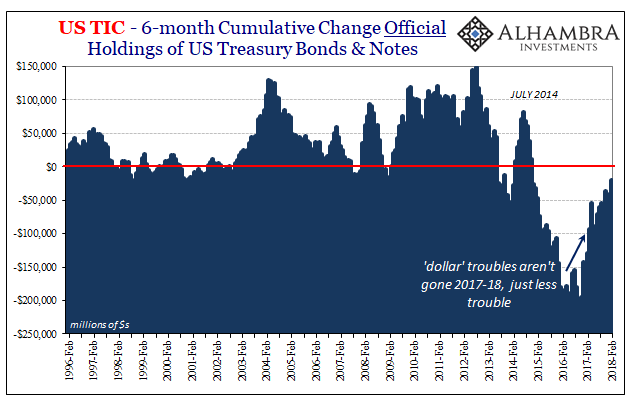 We find buying in pretty much every locale, with one key exception (more on that below). Including China, most of the overseas official sector appears to have been behaving as if nothing much was going on. That may have actually contributed to the problem (liquidations), one that was amplified this time without the usual standby or backstop (selling UST’s).

The question is why. There aren’t any answers that jump out of this largely sterile data. It may be what usually happens during these periods (such as the second half of 2013 and the first half of 2014). Foreign central bankers are every bit susceptible to the global narrative as our own. Each “reflation” or upturn is looked upon as definitive. They undoubtedly believe there is “globally synchronized growth” and by the end of January it was reaching fever pitch.

If you buy into that idea, it’s likely that you fold up shop (“selling UST’s”) regardless of market conditions because you believe in the achievement of normality. No need to intervene in the “dollar short” any more, right?