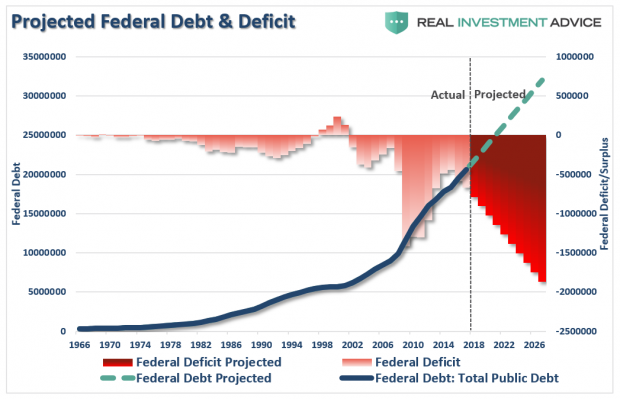 In December of last year, as Congress voted to pass the “Tax Cut & Jobs Act,” I wrote that without “real and substantive cuts to spending,” the debt and deficits will begin to balloon. At that time, I mapped out the trajectory of the deficit based on the cuts to revenue from lower tax rates and sustained levels of government spending.

Since that writing, the government has now lifted the “debt ceiling” for two years and passed a $1.3 Trillion “omnibus spending bill” to operate the government through the end of September, 2018. Of course, since the government has foregone the required Constitutional process of operating on a budget for the last decade, “continuing resolutions,” or “C.R.s,” will remain the standard operating procedure of managing the country’s finances. This means that spending will continue to grow unchecked into the foreseeable future as C.R.’s increase the previously budgeted spending levels automatically by 8% annually. (Rule of 72 says spending doubles every 9-years)

The chart below tracks the cumulative increase in “excess” Government spending above revenue collections. Notice the point at which nominal GDP growth stopped rising. 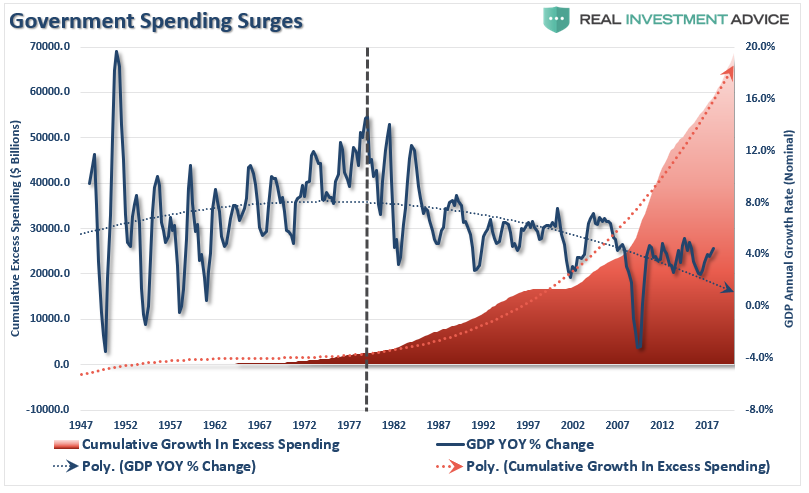 Trillion dollar deficits, of course, are nothing to be excited about as rising debts, and surging deficits, as shown, impede economic growth longer-term as money is diverted from productive investments to debt-service.

While many suggest that “all government spending is good spending,” the reality is that “recycled tax dollars” have a very low, if not negative, “multiplier effect” in the economy. As Dr. Lacy Hunt states:

“The government expenditure multiplier is negative. Based on academic research, the best evidence suggests the multiplier is -0.01, which means that an additional dollar of deficit spending will reduce private GDP by $1.01, resulting in a one-cent decline in real GDP. The deficit spending provides a transitory boost to economic activity, but the initial effect is more than reversed in time. Within no more than three years the economy is worse off on a net basis, with the lagged effects outweighing the initial positive benefit.“

Dr. Hunt is absolutely correct when he notes that due to the aging of America, the mandatory components of federal spending will accelerate sharply over the next decade, causing government outlays as a percent of economic activity to move higher. According to the Center On Budget & Policy Priorities, nearly 75% of every tax dollar goes to non-productive spending. 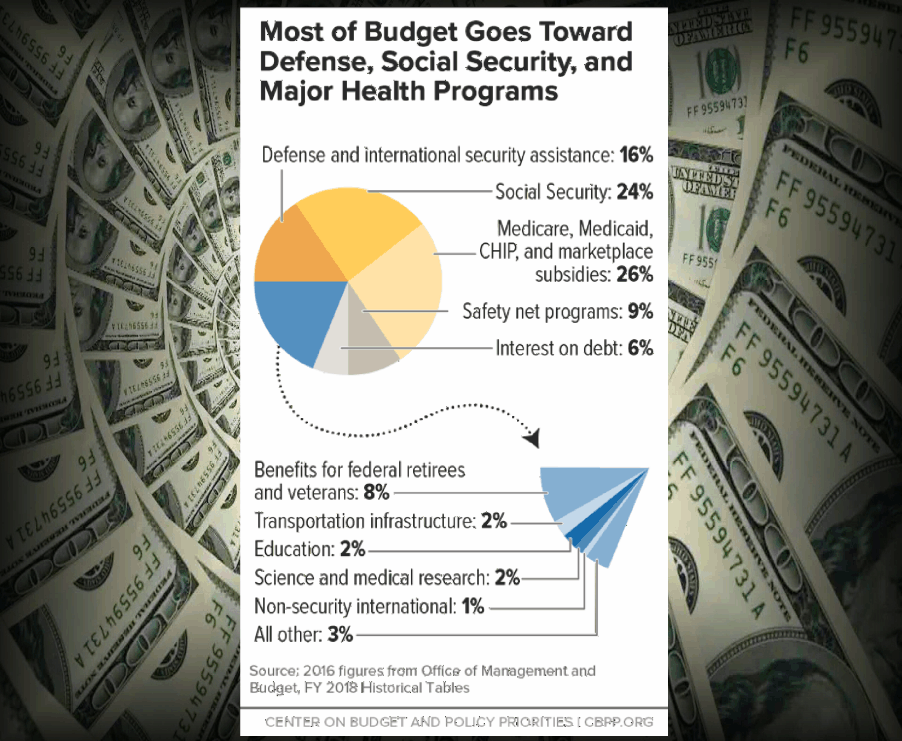 “The rising unfunded discretionary and mandatory federal spending will increase the size of the federal sector, which according to first-rate econometric evidence will contract economic activity. Two Swedish econometricians (Andreas Bergh and Magnus Henrekson, The Journal of Economic Surveys (2011)), substantiate that there is a ‘significant negative correlation’ between the size of government and economic growth. Specifically, ‘an increase in government size by 10 percentage points is associated with a 0.5% to 1% lower annual growth rate.’ This suggests that if spending increases, the government expenditure multiplier will become more negative over time, serving to confound even more dramatically the policy establishment and the public at large, both of whom appear ready to support increased, but unfunded, federal outlays.”