The British Pound hit a fresh 2018 high on Tuesday before suffering setbacks versus the Euro and the US Dollar. A round of price data on Wednesday – the March Consumer, Retail, and Producer Price Indexes – all showed that inflation pressures were not as strong as consensus forecasts called for, undercutting Pound Sterling momentum.

But the British Pound has returned to the topside on Thursday, and for good reason: as the data showed, price pressures remain strong and above +2% on a yearly-basis, keeping real wage growth stagnant (if not negative, depending upon how you measure it). The chances of the BOE putting a hold on its plans to gradually lift interest rates in the UK seems to be small, if at all.

According to overnight index swaps, there is currently an 85% chance of a 25-bps rate hike by the BOE in May, slightly lower than the 89% seen earlier this week. This is an immaterial shift lower. With labor markets remaining tight – the unemployment rate is near a 40-year low – policymakers are going to go full bore ahead with a rate move in May.

The prospect of a rate hike next month should keep a lid on GBP-selling, with only a surprise, negative development in the Brexit saga offering a serious impediment to a tightening step. Even then, it’s more likely that any developments in the Brexit saga are more likely to impact the prospect of a second rate hike 2018, where odds currently stand at 46% (if we see a move, it would be in November not December, as in the former month the BOE will release its final Quarterly Inflation Report of the year). 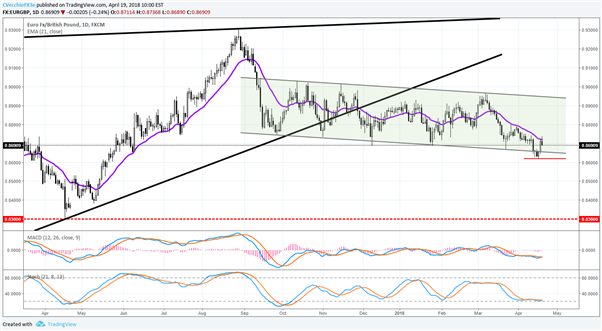 Given the disparity in expectations between the ECB and the BOE, the place to look for additional Pound Sterling strength may be in EUR/GBP. The pair has been trading in a slight descending sideways channel going back to September 2017, but recently, a series of lower highs and lower lows have emerged. Indeed, looking at the daily MACD and Slow Stochastic readings, momentum has shifted to the downside as price has traded below the daily 21-EMA since March 30. For now, focus should be on a return to the lows established near 0.8300 through 2016 and 2017.