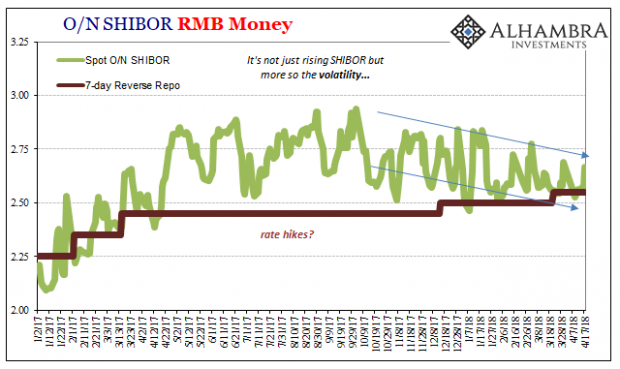 Throughout much of last year, we were told repeatedly that the PBOC was tightening monetary policy. China’s central bank had raised its reverse repo rate twice early on, and then once more last December (and would do so again just last month). These moves coincided with Federal Reserve “rate hikes”, seemingly in line with the whole idea.

Not only that, a “hawkish” PBOC would tend to confirm globally synchronized growth. Shifting stances from the way it had conducted monetary policy during the “rising dollar”, a new directive apparently prioritizing inflation rather than deflation risks is exactly how this central bank would respond to a boom – if it was real.

The narrative, as is usual, contained more inference than evidence. It started with the premise, globally synchronized growth, and then worked backward to find “evidence” of itself. There was never a pickup in Chinese growth, there still isn’t any today, and the PBOC was doing the opposite of tightening particularly later in 2017.

I wrote about these reverse repo theatrics last December under the title Chinese Are Not Tightening, Though They Would Be Thrilled If You Thought That:

It is mere symbolism, which from the Western perspective might seem a bit silly in a “why bother” kind of way, but on that side of the Pacific it is viewed officially as worth the charade so little margin is left in China. For one, PBOC officials know all-too-well that the media will characterize Chinese monetary policy as shifting to, or going further toward, “tightening.” As with both prior “hikes”, the mainstream has dutifully done just that.

And did so again in March. Contrary to all that, there has been a clear downward bias in RMB markets dating back to last October. 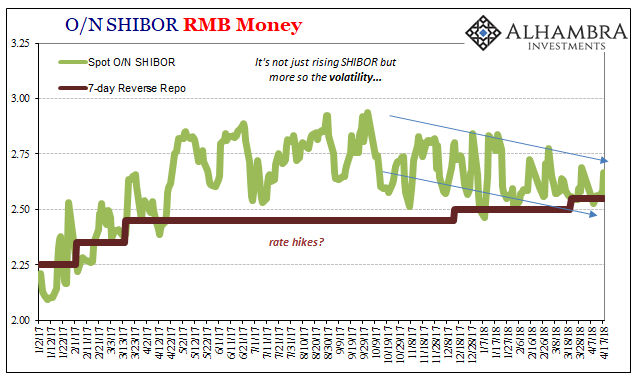 What changed in October isn’t exactly clear, but clear enough. Prior, both secured and unsecured funding were being driven by illiquidity not of the policy rate variety but of the more organic kind owing to bank reserve growth that continues to be hugely constrained. The central bank contrary to the Western narrative began to increaseliquidity in those markets. Though it may not seem like it by convention, even the PBOC has to face trade-offs.