Commodity Money Flow For 2018: Keep An Eye On Dr. Copper

The following three graphs show the percentages gained/lost for commodities for:

The following 1-year and 2-month charts of these commodities show their price relative to their 50-day MA, as well as their prior swing highs/lows, all of which form their respective resistance/support levels.

The expanding swings on the rate-of-change indicator (and new 2-month ROC swing high) on Copper and Silver reflect the recent buying in these two metals. I’ve shown it with an input value of 1 day to measure its strength/weakness from one day to the next to depict short-term interest. So, it’s one indicator that can be monitored to gauge potential sustainability of any further rally next week and beyond…at the moment, it’s hinting of further strength to come.

Lastly, the following monthly chart of Copper shows longer-term major resistance and support (as defined by overlapping Fibonacci retracement levels) around 3.30 and 2.94, respectively. A breakout (and hold) above or below this tightly congested zone could produce a sizable move to follow. 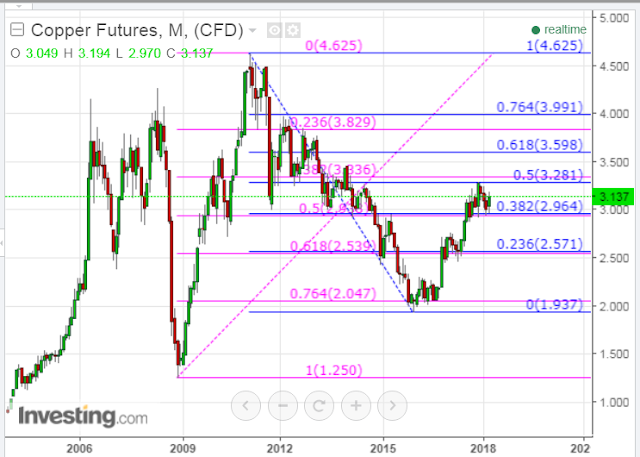