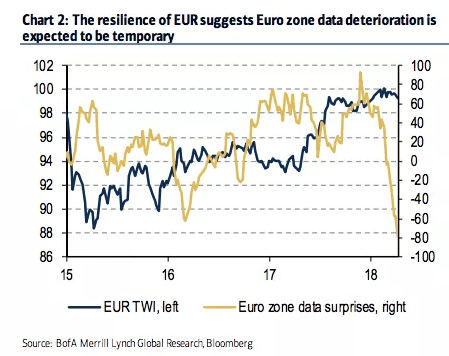 Here’s some shit you probably won’t read. But I wasted time on it anyway, because why not?

That was the tagline I slapped on a post I did last week called “Thoughts On The ECB Minutes And A Bearish Euro Call For EURUSD Bulls.”

You can read that post for yourself (because as noted in the tagline, you probably didn’t read it when I originally published it – who in the U.S. reads the ECB minutes let alone someone else’s read on the minutes, right?), but the point was to talk about the account of the ECB’s March meeting in the context of the recent spate of poor incoming data in Europe and also in the context of the “policymaker paradox”.

That post was itself a followup to my take on the ECB’s annual report, which touched on the same issues. You can read that here.

The worry, generally speaking, is that Draghi may have missed his window or if he hasn’t missed it yet, he may be well on the way to missing it:

The data is rolling over and although the ECB is gingerly tapering asset purchases, rate hikes are still a distant prospect (by design, given that they’re not going to hike until APP is officially over) and there’s still no guarantee that QE won’t be tapered further (to say, €10 billion/month) in September, before it’s wound down completely. The point: Draghi is nowhere close to replenishing his ammo, and as noted above, it looks like he might have missed his chance.

The removal of the the dovish language around APP in the March statement was really nothing more than a free pass to claim they’re making progress on normalization without actually having done anything. That dovish guidance served almost no purpose whatsoever, as no one doubts whether they would be willing to ramp up purchases again should the proverbial shit hit the fan.

Well on Friday, Draghi said this in statement at the IMF meetings in Washington:

Notwithstanding the latest economic indicators, which suggest that the growth cycle may have peaked, the growth momentum is expected to continue. Protectionism may have already had some negative impact on global sentiment indicators. In this context, preserving free and open trade that is underpinned by multilateral cooperation is crucial to foster a favorable global economic environment. While our confidence in the inflation outlook has increased, remaining uncertainties still warrant patience, persistence and prudence with regard to monetary policy. An ample degree of monetary stimulus remains necessary.