“While the Canadian goods trade deficit was smaller than expected by consensus, that’s not to say January’s trade report was good. The deterioration of two-way trade, i.e. sinking real exports and imports, is not a positive development because it points to softening demand both at home and abroad” (National Bank of Canada, March 7, 2018),

Canada’s merchandise trade deficit narrowed a bit in January to C$1.9, due to the 4.3% decline in imports exceeding the 2.1% decline in exports.

Canada’s energy trade surplus rose through the month while the non-energy deficit declined.

These figures are presented in nominal terms, which means that they were affected both by changes in product prices as well as the underlying changes in the volume of imports and exports.

In real terms, however, the January trade balance was approximately identical to December’s, as both export and import volumes declined by 4%.

The recent data seems to be signalling that foreign trade will once again be a net detractor from Canada’s economic growth in the first quarter of 2018. In the fourth quarter, net exports reduced annual real GDP growth by 1.2 ppts. 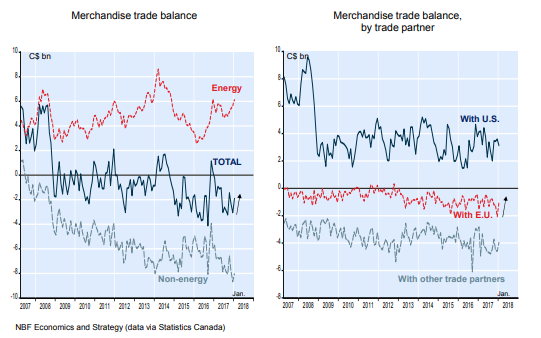 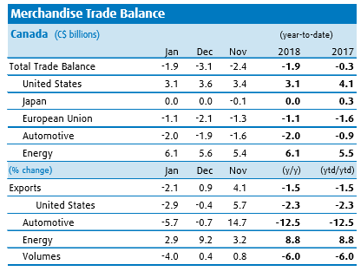