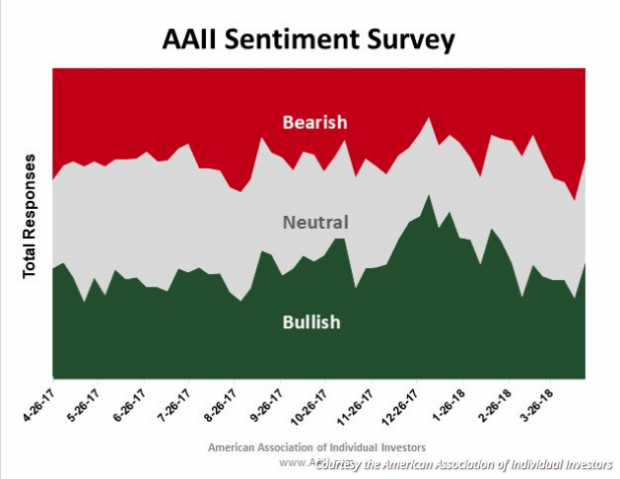 Equities Search For A Catalyst: Trading What Is In Front Of You

All three major averages fell in the Thursday trading session as bond yields were on the rise. The 10-year Treasury yield trended higher and tipped over 2.92% in yesterday’s trading session, which stirred up anxiety amongst investors once again. The Dow Jones Industrial Average fell 0.3% to 24,665.89. The S&P 500 lost 0.6% to 2,693.13. Both held just above their 50-day moving average despite dipping below it during the trading day. The Nasdaq Composite Index fell 0.8% to 7,238.06. Helping stocks in the final hour of trading was a Bloomberg News report citing that Deputy Attorney General Rosenstein told President Donald Trump that he wasn’t a target of special counsel Robert Mueller’s probe.

Although the month of April is finding equities moving higher thus far, it would appear that the tug-of-war between equities and bonds will persist through much of 2018. But investor sentiment is improving from a relatively low base in February and March of this year. The percentage of investors optimistic about the U.S. stock market jumped in the latest week. According to the AAII Sentiment Survey, 37.8% of investors describe themselves as bullish, meaning they expect prices will be higher six months in the future. The reading represents an eight-week high, and growth of 11.7% from the previous week. The reading is still below the long-term average of 38.5 percent. 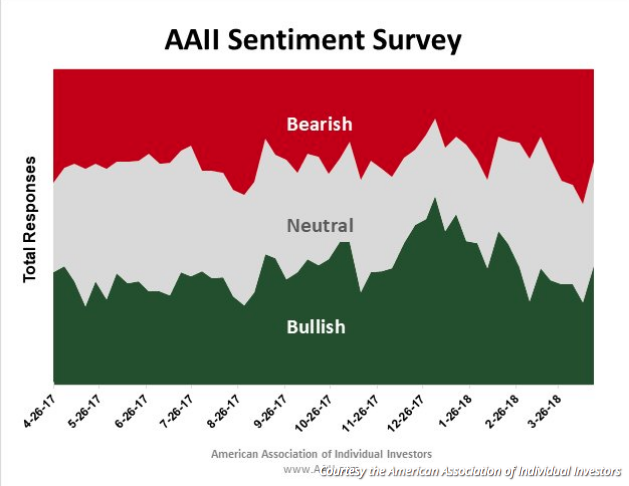 Pessimism fell by 13.5% to 29.2% in the latest week, dropping below its long-term average of 30.5% for the first time in four weeks. Last week, the ratio of bears hit its highest level since March 2017.

Despite a strong start to the earnings season, it seems as though equities have been stuck in a rather wide trading range between the February lows and the more recent highs of mid-March. When we look at the financial sector, which kicked off earnings seasons strongly, we come to recognize that the financial sector has seen 28% blended earnings growth this quarter. Even with this strong performance, most reporting bank stocks have fallen upon delivering strong earnings and revenue results. Moreover, even the financial sector Financials XLF  ETF has dropped 1.5% during this reporting period and since last week. Having said that, the XLF did bounce back a little bit in yesterday’s trading session. I believe the XLF will trend higher through April.