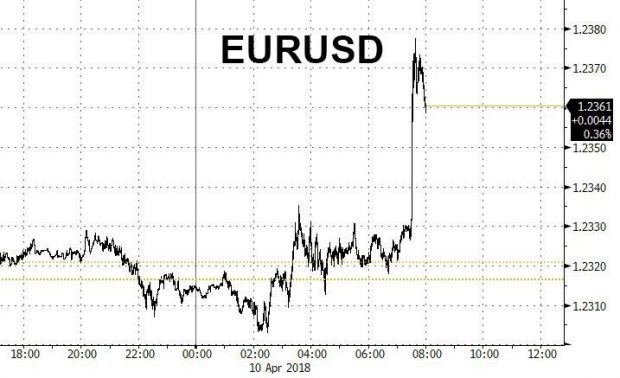 After a relatively flat overnight session for the common currency, the EURUSD spiked as much as 50 pips higher after Reuters quoted ECB hawk Ewald Nowotny who this morning sounded especially hawkish, suggesting that the ECB could lift the deposit rate from -0.40% to -0.20% to start the process of rate hikes…

… however, it was unclear when said process would begin:

In immediate response, the EUR spiked higher but has since faded some of its gains: 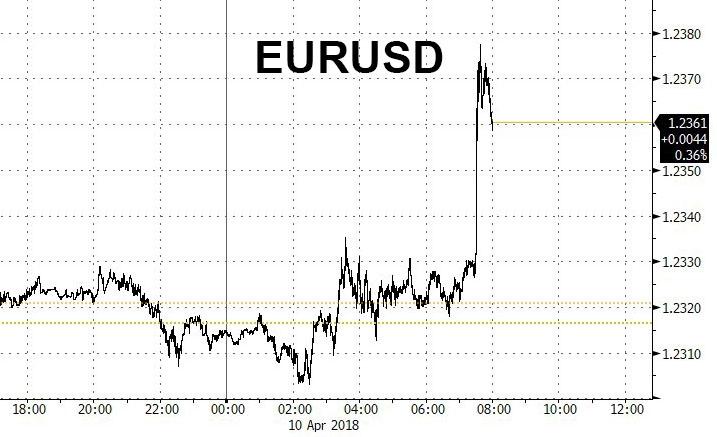 As several desks have noted, while Nowotny is one of the ECB’s most hawkish members, discussion of a 20bps hike to start has been very much taboo until now, and as Citi notes, “is aggressive enough on its own.” In breaking with Draghi’s “measured” tradition, Nowotny said that he would have no problem hiking rates as the first step and as part of a staggered hike, which is a stark comparison to the gradual/cautious ECB official guidance.

Earlier in the day, Nowotny said that now is the time for gradual policy normalization and that “the euro-area economy today clearly is in the middle of a strong and broad-based cyclical upswing.”

Then, in the Reuters interview that followed, Nowotny said that “I would have no problem with moving from -0.4% to -0.2% as a first step and then, as a second step, include the (main refinancing) policy rate,” he said. However do note that Nowotny has given no indication on when – “This is the structure. The exact timing? It’s too early to tell you,” he added.

Following Nowotny’s statement, there has been an immediate squeeze on the headlines, with the EUR move higher likely exaggerated by a short squeeze. The move has also translated into broader USD selling against G10 such as GBP. In fixed income, German 10y bund yields at 0.524% now.