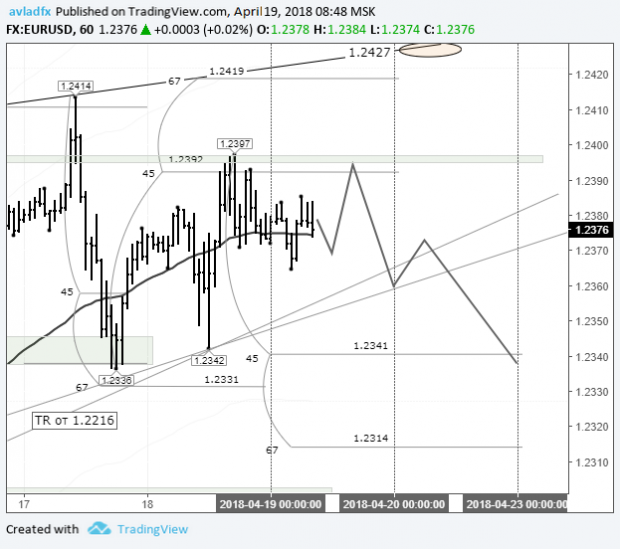 EURUSD: Price Caught Up At The Balance Line

On Wednesday the 18th of April, trading on the EURUSD pair closed slightly up at 1.2373. The single currency got a significant boost from the EURGBP and EURCAD crosses. The pound dropped against both the dollar and euro following the release of disappointing UK inflation figures for March. The Canadian dollar lost ground to the greenback and euro after the BoC’s decision to maintain its key rate at 1.25%.

This decision fell in line with market expectations. The negative reaction that ensued was a result of the accompanying statement made by the central bank, in which there was no hint of a possible rate hike in the near future. The statement gave the impression that the regulator would be approaching this subject with caution. 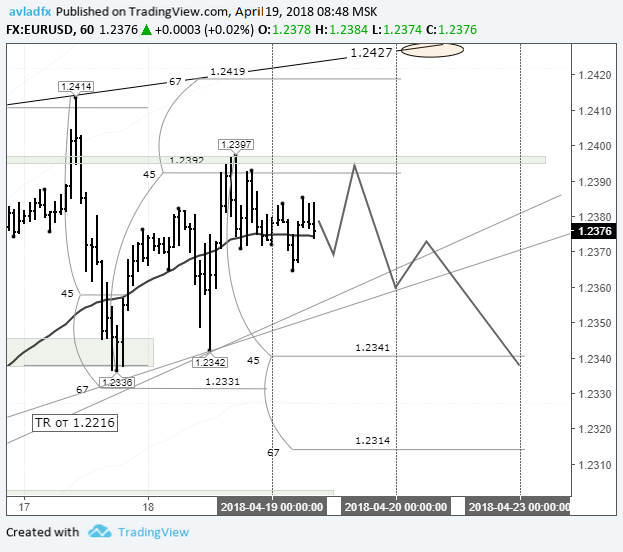 The correction from the 1.2336 low amounted to 45 degrees. Buyers were met with resistance at around 1.24. This forced them to retreat to the LB balance line at 1.2375.

In today’s Asian session, the dollar’s dynamics are mixed. A few hours ago, all of the euro crosses were trading up, but now, the EURGBP, EURCAD, and EURAUD are all in the red. Those currencies that have made gains against the dollar have lost ground to the euro.

The market need to rebalance itself after the British pound’s and Canadian dollar’s decline yesterday. This means that if the crosses decline further, the EURUSD pair could decline without subsequently recovering to 1.2397.

On the chart above, I’ve shown my predictions for the market for the next two days. The TR trend line runs through 1.2364. The quicker the bears manage to break this level, the more likely we are to see a drop to 1.2300.