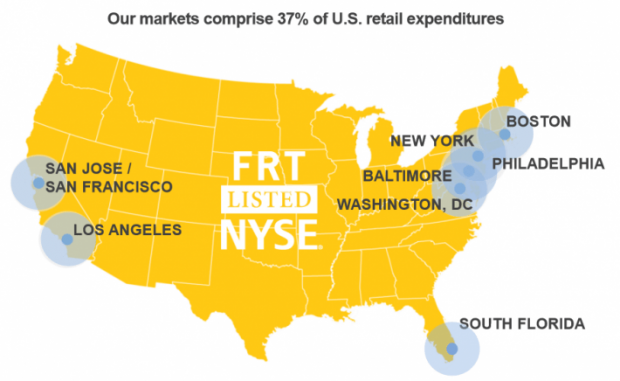 Federal Realty Investment Trust (FRT) has the longest streak of consecutive dividend increases in the entire REIT sector, a group of companies that is known for its dividends. FRT has paid increasing dividends for 50 consecutive years, making it a member of the exclusive Dividend Kings club. You can see the full list of all 25 Dividend Kings here.

FRT is one of the finest dividend payers in its sector and a recent selloff has made the stock look attractive for dividend growth. Dividend Kings are the best of the best when it comes to returning cash to shareholders and this article will examine FRT’s valuation and dividend outlook.

FRT was founded back in 1962 and has paid consecutive dividends to its shareholders since its founding, which an impressive streak in its own right. It has also managed to increase those dividends for 50 consecutive years, an amazing accomplishment for any business, but particularly one that is in a highly cyclical sector like real estate. FRT is truly in a league of its own, sporting a market cap of $8.6B and a current yield of 3.4%.

The company’s stated strategy is to be the leader in the ownership, operation and redevelopment of high-quality retail-based properties located primarily in major coastal markets like Boston, Los Angeles, San Francisco and Washington, D.C. FRT’s heaviest concentration of properties is in California, followed by the company’s home state of Maryland.

The company’s portfolio is well-diversified in terms of locations, property types and tenants. FRT boasts more than 100 properties and 24M square feet, making a true giant in its field. It uses a variety of leasing techniques to achieve long term success including its core business of retail, dining, residential, specialty leasing as well as mixed use development.

It has very specific criteria when going after new properties that outline areas it will operate in, population density and income levels as well as the size of potential acquisitions. This strategy has certainly served it well in the past 56 years and will continue to do so going forward.

Revenue mix is very strong as well as FRT has no more than 9% exposure to any one sector of retail. It also counts restaurants, office space and entertainment among its customer base but make no mistake; FRT is a retail-heavy business. That reliance upon retail in general is FRT’s principal risk going forward but as its 50-year long streak of dividend increases shows, its diversification has allowed it to weather any economic storm that has come up during its history.

FRT’s fourth quarter and full-year 2017 results were reported in mid-February and the company’s long track record of moderate growth continued. FFO per share was up to $5.74 for 2017 against $5.65 in 2016 despite fourth quarter FFO that was basically flat. The company’s same-center property operating income grew 3.4% for the year and 2.6% for the fourth quarter.

In addition, FRT signed leases for 300k square feet of comparable space during the quarter at a very high average rent of $34.75psf and achieved cash basis rollover growth on those comparable spaces of 15%. Finally, management guided for 2018 FFO of $6.08 to $6.24, which would represent roughly 6% to 9% FFO growth over 2017’s results.