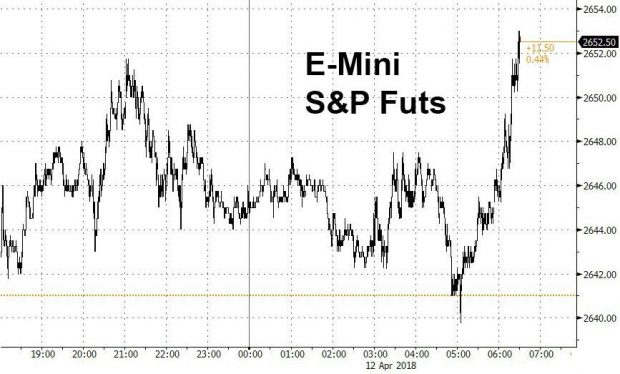 It was a relatively subdued trading session, with markets treading water amid modest volumes awaiting news of action in Syria, until just after 6am ET when as we reported previously, Trump reversed on his Wednesday morning tweet, and in his latest tweetstorm, said that he “Never said when an attack on Syria would take place. Could be very soon or not so soon at all!”

Well, that certainly is one way to try and regain the “element of surprise”, even if it makes the whole fiasco even worse.

While implicitly Trump’s tweet makes the market confusion about Syria even worse, as instead of the original timetable of “72 hours before a strike”, this leaves the now-certain Syrian strike as open-ended, delaying the risk of a global selloff once Trump does launch, so far world stock markets, and US index futures, are loving what they see as a sign of de-escalation, and following Trump’s tweet, stocks in Europe and the UK, along with U.S. stock futures have jumped… 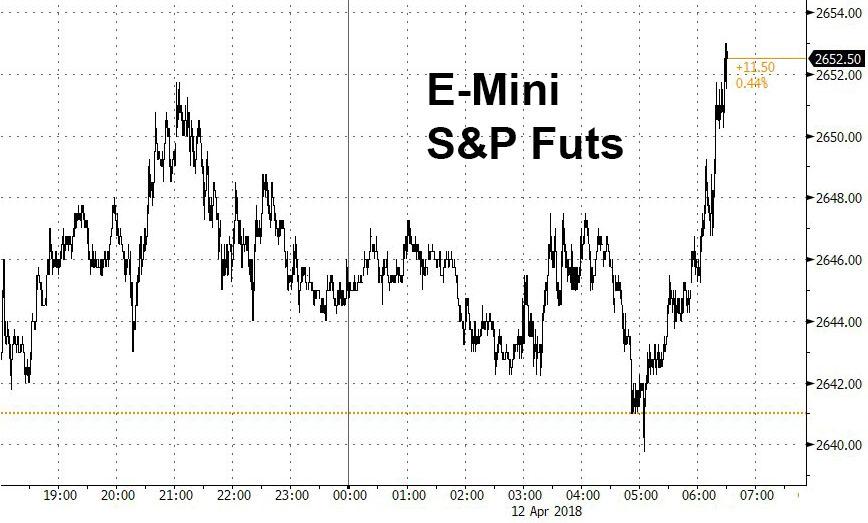 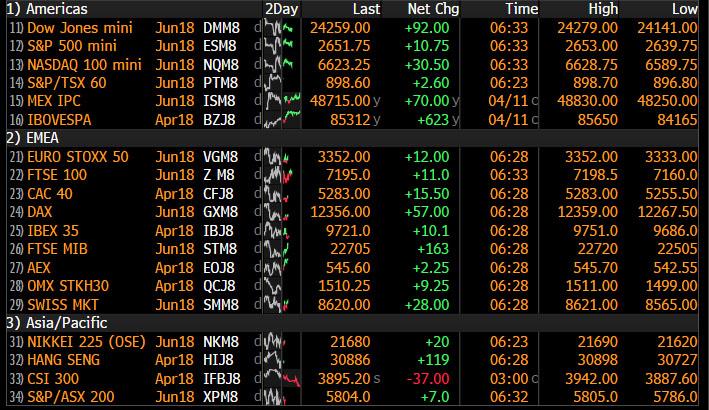 That said, the situation in Syria is still problematic, and overnight we got reports that the US-led coalition was asking all Middle East flight companies to change itinerary for next 48 hours amid possible strike, according to Kurdistan24. Additionally, French President Macron says chemical weapons were used in Syria and that a reaction is coming in days.  All Syria military bases are said to be on high alert as a US attack is expected, according to sources.

Trump’s Tweet was more than sufficient to make markets forget that, as China explained overnight, the reason for the torrid Tuesday rally was – as we said – wrong after Beijing warned that Xi speech wasn’t a concession to US and added it was ready to hit back at any escalation. Of course, that was Tuesday’s fake news, and who cares if it catalyzed a huge surge in the stock market.

Meanwhile, European stocks got an extra lift earlier in the session after the Euro weakened to session lows after industrial output unexpectedly declined for a third consecutive month. In other news, bad news is good again, as the world’s “global coordinated recovery and reflation” phase slowly but surely ends. European equities began the day trading slightly lower with the risk-on sentiment seen in yesterday’s trade not being echoed early on, as market sentiment was largely being guided by increased tensions in Syria amid potentially imminent – or not so imminent now – military action by the US. European equity sector performance has largely been driven by company-specific news with Deutsche Telekom (+4%) driving the telecoms sector higher (+0.7%) as T-Mobile, a company in which they own 64% of shares, has restarted deal talks with Sprint.

In Asia, Australia’s ASX 200 (-0.4%) failed to sustain mild opening gains as softer Australian consumer sentiment data and weaker than expected Chinese inflation figures clouded the upside seen in commodity-related sectors. Nikkei 225 (-0.5%) was also lackluster with J Front the worst off among the retailers on expectations of weaker profits this year, while SoftBank outperformed on M&A hopes after reports its unit Sprint and T-Mobile renewed merger talks. The Hang Seng (+0.5%) and Shanghai Comp. (+0.5%) were initially choppy as participants digested the miss on Chinese CPI and PPI data, although stocks gradually found some comfort from efforts by PBoC Governor Yi Gang to build upon the momentum from President Xi at the Boao forum in which the PBoC Governor talked about opening up and announced to increase stock connect quotas.

Meanwhile, geopolitical fears are not only stressing stocks but oil too, although rising to the highest price in over 3 years, West Texas crude turned modestly lower overnight following recent big gains. As Bloomberg notes, oil has been advancing on growing concerns that the U.S. will take military action in the Middle East, and after Saudi Arabia intercepted a ballistic missile and shot down drones. 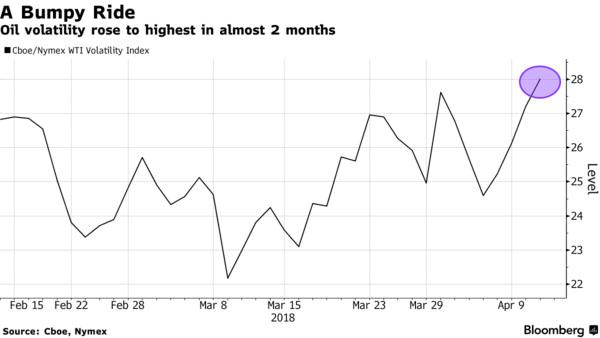 While that pushed down most of the main stock benchmarks in the region, it gave a break to oil-rich Russia, where the ruble bounced back from the lowest level in 15 months.

Elsewhere, markets were additionally pressured by Wednesday’s Fed hawkish minutes which showed officials leaned toward a slightly faster pace of policy tightening at their March meeting, even as they saw clear “downside risks” for the biggest economy from retaliatory trade duties, in other words, all Trump needs to avoid more rate hikes is escalating the trade war with China to nuclear.

Overnight, RBA Governor Lowe said his board does not see a strong case for raising interest rates in the near term; more likely next move in cash rate will be up rather than down. While some central banks are hiking rates, Australian circumstances are different. Serious escalation of trade tensions would risk health of the economy. Meanwhile, in Japan, BoJ Governor Kuroda says BoJ will continue powerful QE to meet inflation target, adds that there are expectations for consumer prices to keep rising.

Today’s data include jobless claims and earnings from BlackRock, Delta Air Lines, and Rite Aid. The U.S. won’t tolerate Russian aggression anymore, Secretary of State nominee Mike Pompeo will say at his confirmation hearing Thursday, according to prepared remarks. He’ll make it a “personal priority” to work with allies to see if it’s possible to fix the Iran nuclear deal.