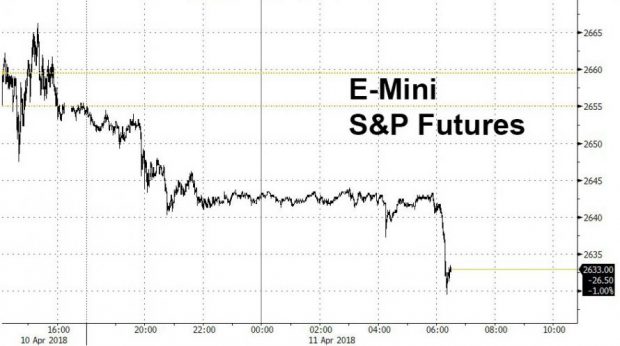 The daily see-saw pattern in capital markets continues and after yesterday’s euphoric sprint higher on what the market misinterpreted as “conciliatory” remarks by China’s president Xi, this morning global stocks and US equity futures are sharply lower on fears of imminent military action in Syria.

Europe’s Stoxx 600 fell as much as 0.5%, trimming recent sharp gains, following a statement by the Russian ambassador to Lebanon that any US missiles – and the sources that fired them – will be shot down by Russia, while US futures took a sharp leg lower just after 6am ET. 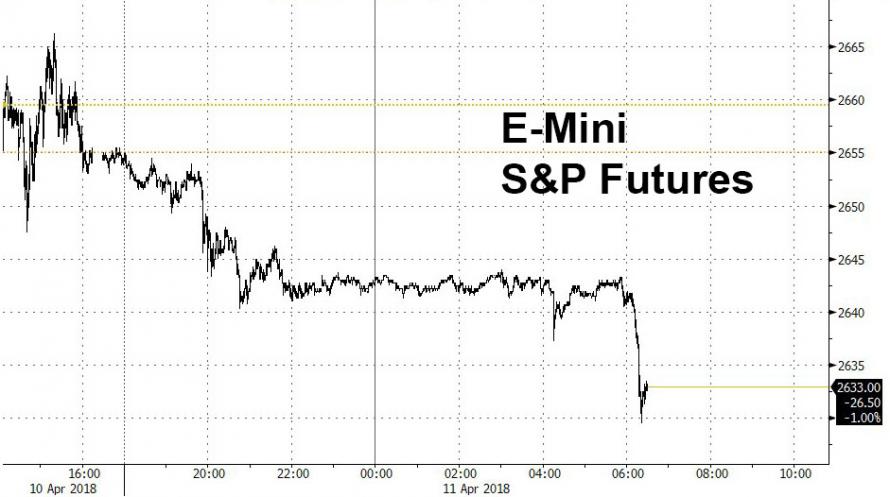 Meanwhile, in an indication that a strike is imminent, we reported overnight that Europe’s Eurocontrol air traffic agency asked airlines to apply caution on flights to the eastern Mediterranean region because of possible “imminent” air strikes in Syria over the next 72 hours. As a result, global markets are well in the red this morning, and sinking fast on fears how Russia could retaliate should the US stage another “wag the dog” exercise. 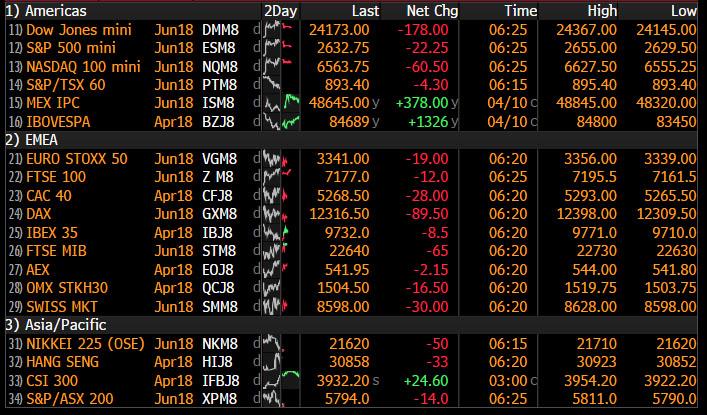 Earlier, trade in Asia was mixed with indexes in China and Hong Kong posting the biggest gains in that region as PBOC Governor Yi Gang offered more details on pledges to open the world’s second-biggest economy, and vowed China would not devalue the Yuan in response to trade war (more shortly). Australia’s ASX 200 (-0.4%) failed to sustain mild opening gains as softer Australian consumer sentiment data and weaker than expected Chinese inflation figures clouded the upside seen in commodity-related sectors. Nikkei 225 (-0.5%) was also lacklustre with J Front the worst off amongst the retailers on expectations of weaker profits this year, while SoftBank outperformed on M&A hopes after reports its unit Sprint and T-Mobile renewed merger talks. Hang Seng (+0.5%) and Shanghai Comp. (+0.5%) were initially choppy as participants digested the miss on Chinese CPI and PPI data, although stocks gradually found some comfort from efforts by PBoC Governor Yi Gang to build upon the momentum from President Xi at the Boao forum in which the PBoC Governor talked about opening up and announced to increase stock connect quotas.

However today the favorable shift in trade wars was upstaged by the threat of a very real war in Syria, while investors await inflation data this morning at 830am ET for the next clue on the path for interest rates in the world’s biggest economy. Following yesterday’s hot PPI print, markets are concerned that inflationary pressures could accelerate tightening, a move that could have ramifications across all assets as the synchronized growth story behind the global bull market shows signs of maturing.

Of note: today’s CPI report will finally see the wireless cell phone services component anniversary and be removed from the Y/Y calculation. As a reminder, the disappointing slowdown in core CPI inflation last year was partially attributed to a one-off shock in wireless telephone services, which have up until now weighed on yoy inflation. In today’s March release, that drag will roll off the calculation leading to a sharp improvement. As a result, consensus expected core CPI yoy inflation to jump to 2.1% from 1.8%. 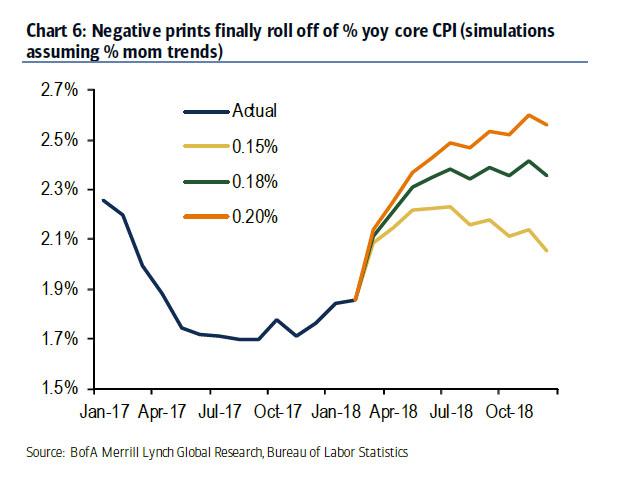 However, not even CPI may be today’s biggest mover in light of the renewed geopolitical stress around Syria. Overnight, President Donald Trump intensified preparations for a U.S. response to a suspected chemical weapons attack in the country, canceling a planned trip this weekend to South America. The potential air strike on Syria sets up the danger of a conflict between the U.S. and Russia, which disagrees that a chemical attack took place. Russian assets are already reeling from a series of fresh American sanctions. The ruble extended its slump and the country’s bonds and stocks retreated as investors continued to ditch holdings.