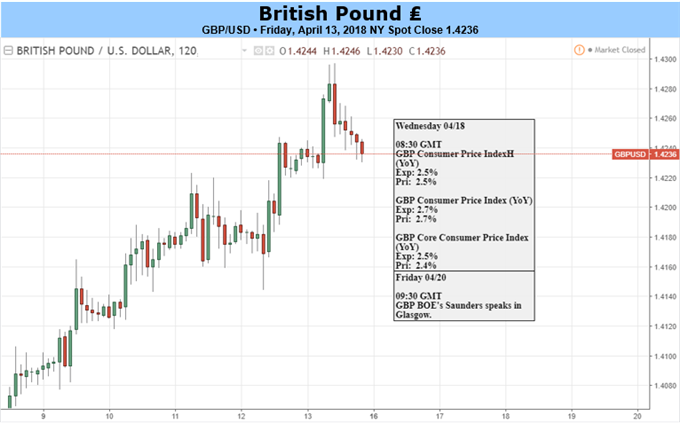 Sterling bulls have enjoyed a positive week with GBP making gains against most other currency pairs. Despite a lack of any hard data, EURGBP trades at levels last seen in May 2017, while GBPUSD trades at a ten-week high around 1.4300. While GBP may make further gains, we remain neutral ahead of closely watched UK jobs, inflation and wages data that will provide further clarity on the state of the economy ahead of the Bank of England’s policy decision on May 10.

UK trade weighted Sterling continued its upturn and traded back at highs last seen just after the Brexit vote in June 2016. The upturn was helped by a weaker EUR and to a lesser extent USD with the former impacted by ongoing low inflation in the single market while US President Donald Trump’s rhetoric over potential action in Syria weighed on the greenback.

Ahead the monthly look at UK wages, jobs and inflation will once again be closely followed with expectations that real UK wages may turn positive, with higher weekly average earnings driving the move.

On the four-hour chart Sterling continues to look well supported against the greenback, comfortably trading above all three moving averages with the move given a little further upside boost by the break above the recent tops at 1.42450. The stochastic indicator is in overbought territory and turning lower, so while a small move lower may happen, Sterling should remain firm going into the figures next week.