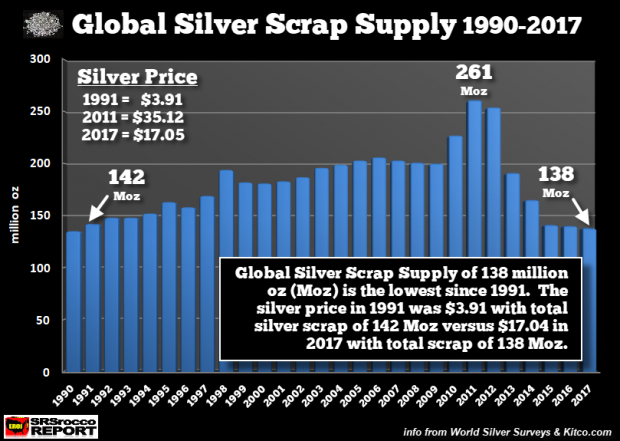 Global silver scrap supply fell to its lowest level in 26 years. World silver recycling in 2017 dropped by nearly 50% since its peak in 2011. According to the 2018 World Silver Survey, global silver scrap supply declined to 138 million oz (Moz) compared to 261 Moz in 2011. While the lower silver price is partly responsible for the large drop in silver recycling, there are other market dynamics.

Furthermore, a lot of silverware was recycled during the period of rising prices (2007-2012). A lot of Millennials who inherited their parent’s (and grandparents) silverware decided it was much easier to pawn it rather than spending a lot of time polishing it for holiday gatherings. Which means, a lot of available stocks of silver scrap have already been recycled. 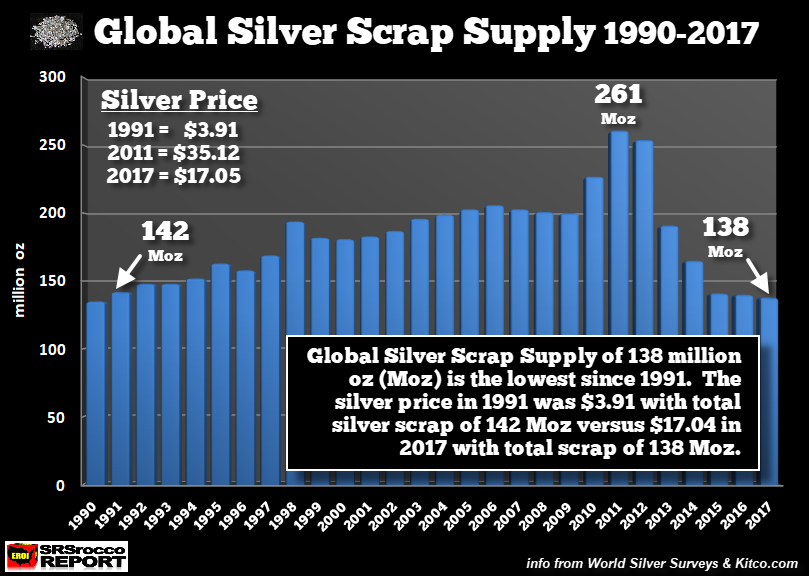 Now according to the Metal Focus Silver Scrap Report published in 2015, they forecasted the following percentages of silver scrap from the various sectors:

While it is well known that the majority of silver scrap comes from recycling of industrial silver waste, due to the industrial sector being the largest user of silver, jewelry only accounts for 10% but is the second largest consumer.For example, the 2018 World Silver Survey reported that the industrial sector consumed nearly 600 Moz of silver in 2017 while jewelry fabricators used 209 Moz.However, silverware and the photographic sectors only consumed 102 Moz, but account for 28% of silver scrap supply.