As we put fingers to keys here in pre-dawn San Francisco, it’s been some 10 hours since the US/UK/France surgically precise strike on chemical facilities in Syria. To what extent there is a Russia et alia response remains in the balance. The effect on Gold, be it bought, ignored or sold, we’ll see when the new week unfolds.

Of course now we’ve had the “when” and early reports side toward mission accomplished. And if there’s one thing we’ve time and again seen over the years it’s Gold being bought on geo-political talk, but then returning back from whence it came upon the talk morphing into the walk.

Short-term, cue uncertainty and Gold flies; change the subject and Gold dies. But at the end of the long-term day, remember the 3-Ds: Debasement, Debt, Derivatives toward making Gold the ultimate prize.

Indeed, whether or not by surprise, this past week we saw Gold reach new highs … at least for this year-to-date … price reaching up to 1369 on the “Syria!” tweet, a mere eight points from the vaunted level of Base Camp 1377. However then came price’s demise down to as low as 1336 on the “When?” tweet, the uncertainty buyers nonetheless racing in to save the week in settling Gold yesterday (Friday) at 1349 — and as depicted in the weekly bars — the parabolic Long trend of ascending blue dots being firmly maintained: 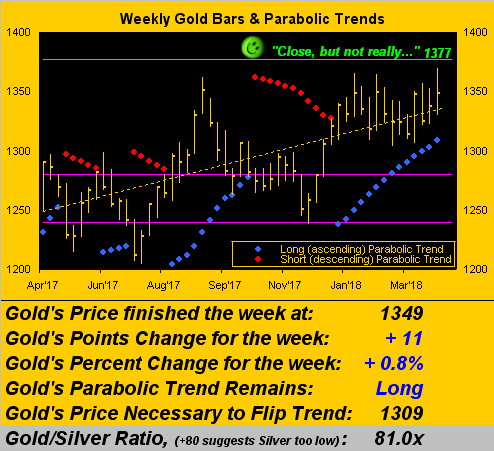 Noting that the Gold/Silver ratio is 81.0x, it’s been above 80x for a millennium-to-date record 45 of the past 49 trading days — i.e. since February 2 — which was also the last date that Silver traded outside of the 16s.  One positive metric recorded during the past week was March’s wholesale (PPI) inflation reading of +0.3% … which could mean higher retail (CPI) inflation is en route … but the latter came in with a deflationary reading of -0.1%. Growth in Import Prices slowed while Export Prices literally fell.