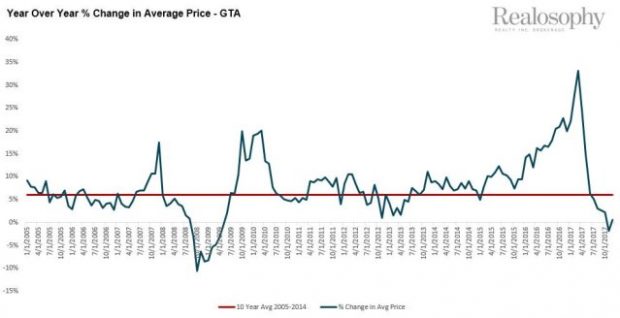 GTA Home Prices Declining Faster Than The 2006 Us Housing Bust

As charted below, after nearly doubling in 4 years between Jan 2013 and March 2017, median home prices in the Greater Toronto Area fell 18% in just four months– and much faster than declines seem in the most frothy US markets after that cycle peaked in 2006.

It’s worth noting though, that declines in the most over-valued US cities–like Miami, Las Vegas, Phoenix and others–took several years to complete and only after median prices had fallen about 60%. It is doubtful, therefore, that the most overvalued property markets in Canada will get away with just the quick 18-20% price correction to date. Stay tuned. As the Realosophy report reminds us, cyclical housing declines tend to be elongated by sellers slow to adjust their asking prices:

…In equity markets, prices adjust immediately when demand falls. In real estate markets, a decline in demand is typically accompanied by a rise in inventory followed by a slow decline in prices. Sellers are typically slow to adjust their prices down for several reasons: Firstly, sellers have a tendency to want the peak prices gained by their neighbours and are prepared to wait longer as accepting anything less is perceived as a loss. When sellers do reduce their prices, they’re more likely to reduce their price very gradually, hoping to find the right buyer (Case and Shiller, 2003).

While it is true that price declines over the past year have already cost sellers an estimated $136 million, on the bright side, we should appreciate that it has also saved buyers from spending and borrowing those same extra millions for shelter. And this frees up more of their cash flow for increased savings for retirement and consumption.

Lower prices are part of the healing process necessary to restore a healthier social equilibrium and sustainability for the Canadian economy. We should welcome this needed adjustment cycle.