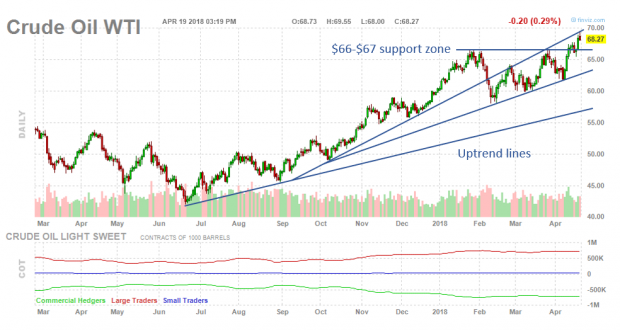 Here’s What To Watch In Crude Oil Right Now

After experiencing weakness in February and March, crude oil spiked to three-year highs in April due to geopolitical fears associated with the Syria bombing campaign as well as falling inventories. Earlier today, President Trump tweeted that OPEC was to blame for “artificially Very High!” crude oil prices, which he said are “No good and will not be accepted!” In this piece, we will look at key technical levels and other information relevant for understanding crude oil prices.

Since the summer of 2017, crude oil has been climbing a series of uptrend lines, but broke below one of these lines during the market rout of early-February 2018. WTI crude oil broke above its $66-$67 resistance last week, which is a bullish technical signal if it can be sustained. If WTI crude oil breaks back below this level, however, it would be a bearish sign. 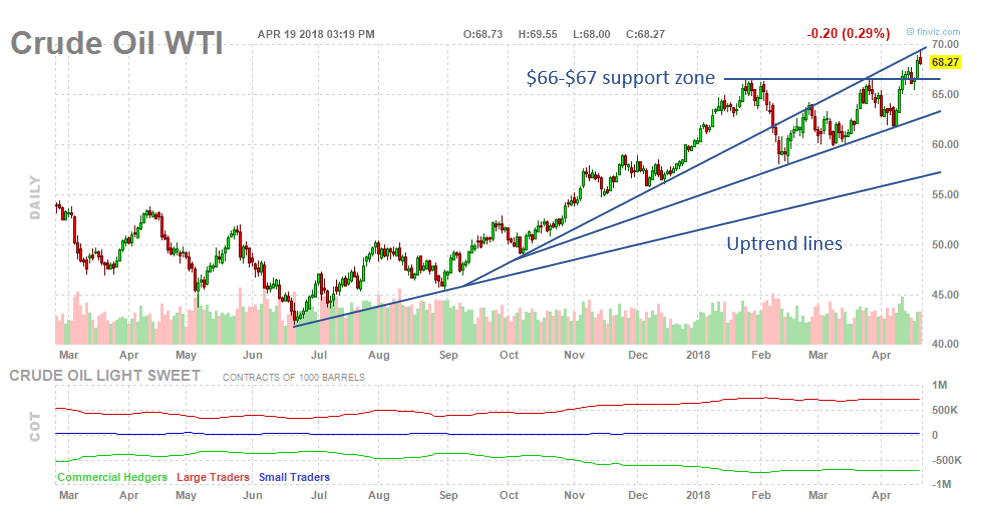 A major reason for skepticism about crude oil’s recent rally is the fact that the “smart money” or commercial futures hedgers currently have their largest short position ever – even larger than before the 2014/2015 crude oil crash. The “smart money” tend to be right at major market turning points. At the same time, the “dumb money” or large, trend-following traders are the most bullish they’ve ever been. There is a very good chance that, when the trend finally changes, there is going to be a violent liquidation sell-off. 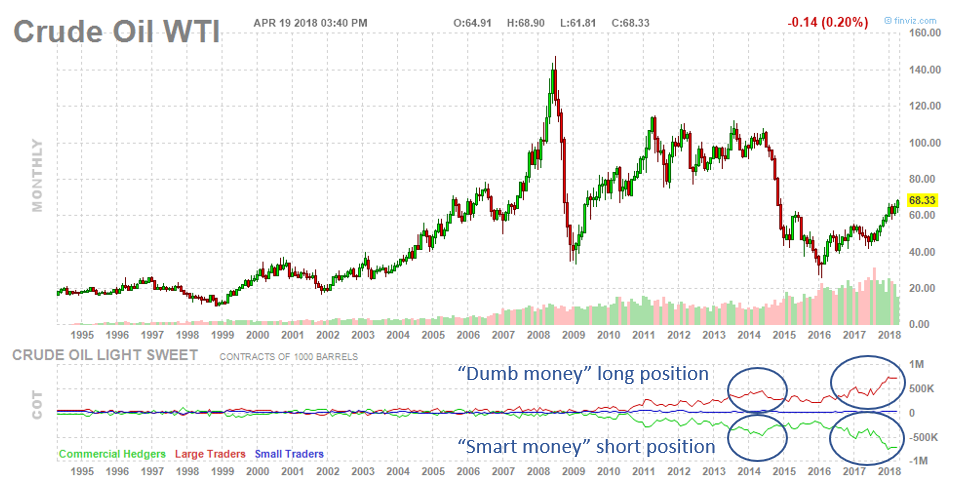 Similar to WTI crude oil, Brent crude has been climbing a couple uptrend lines as well. The recent breakout over $71 is a bullish sign, but only if it can be sustained; if Brent breaks back below this level, it would give a bearish confirmation signal.

It is worth watching the U.S. Dollar Index to gain insight into crude oil’s trends (the dollar and crude oil trade inversely). The dollar’s bearish action of the past year is one of the main reasons for the rally in crude oil. The dollar has been falling within a channel pattern and has recently formed a triangle pattern. If the dollar can break out of the channel and triangle pattern to the upside, it would give a bullish confirmation signal for the dollar and a bearish signal for crude oil (or vice versa). The “smart money” or commercial futures hedgers are currently bullish on the dollar; the last several times they’ve positioned in a similar manner, the dollar rallied.