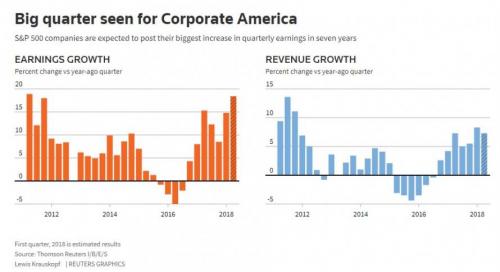 While the main event this week will be the official start of Q1 earnings season which is expected to be blockbuster, if mainly at the EPS level thanks to Trump’s corporate tax cut, the biggest risk overhang remains the escalating trade war with China, and specifically Beijing’s retaliation to the unexpected Trump escalation in which he told the USTR to consider an additional $100BN in tariffs for a $150BN total.

As previously discussed, one potential complication in the Chinese retaliation is that the US does not have $150BN in exports to China, which means that Beijing will need to get creative in crafting its escalating response.

That said, China has no less than previously discussedhow to escalate, the problem being however that all five are what some have dubbed “nuclear” choices, and include: