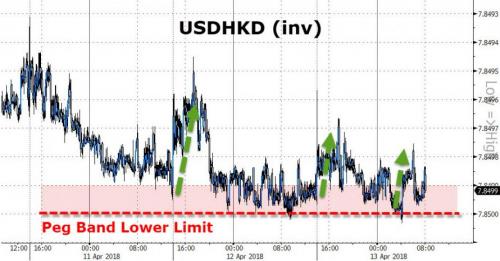 The HKMA conducted two foreign exchange transactions, buying the Hong Kong dollar and selling the greenback to the market. The total value of the transaction was HKD3.2 billion (USD407 million), reducing the balance of the banking system to HKD176.5 billion.

But for now, it’s not working.

“Traders will not actually challenge the bottom line of the HKMA and we are dealing above that line,” a large-scale Chinese foreign exchange dealer told Yicai Global, saying that HKMA’s delay in intervention may have been designed for a market “pressure test.”

But, as we noted previously, The HKMA faces an uphill battle as money flows are against them in the global carry trade.

This is an arbitrage, where traders take advantage of differences in prices, selling a low-yielding product (the Hong Kong dollar) to buy a high-yielding product (the US dollar). In this case, the price difference is between the local borrowing cost known as the Hong Kong interbank offered rate (Hibor) and the US borrowing cost known as the Libor.

Simply put, traders are borrowing against the low Hibor, selling the Hong Kong dollar to buy the US currency for investments in high-yielding US assets. The difference between the two is widest since 2008.