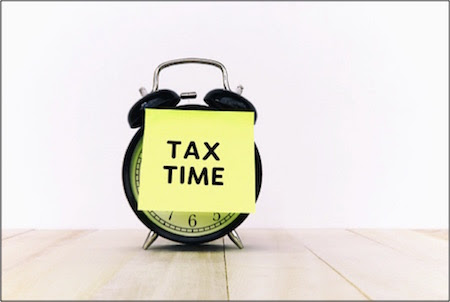 How To Get Your Tax Weekend Back

This weekend millions of Americans and/or their accountants are preparing to file income tax returns. Tax day is an annual event as significant as the Fourth of July – though far less fun. 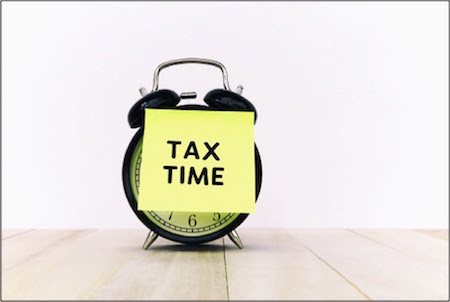 My friends outside the US – and I have many – observe our ordeal with a combination of amusement and pity. They don’t like taxes either, and often pay far more than we do. But their governments, for the most part, don’t put people through such torture every year. They appear to have found better ways. Why can’t we?

Today we’re going to look at who wins and who loses under the new tax law. I think many of you will be surprised.

Each year the IRS releases aggregate data on individual income taxes, with a two-year delay. The Tax Foundation helpfully organizes the reports, and in January they released their summary of the data for 2015. We will look at estimates for this year in just a bit.

In 2015, 141.2 million taxpayers reported a total of $10.14 trillion in adjusted gross income (AGI). On this amount, they paid $1.45 trillion in taxes, or 14.3%. That’s our collective average tax rate, in other words. But we know averages can be deceiving, and this one certainly is. Most people paid well below that rate, and a small number paid a great deal more.

Note, that’s the lower half of taxpayers – meaning they filed tax returns. There’s a large group below them who didn’t have to file because they had no taxable income. So well over half the population either paid no income tax at all or paid a very low percentage rate.

Jealous? You shouldn’t be. Do the math and you’ll see the average AGI for this bottom half of taxpayers was only $16,211. These are not wealthy people. Literally, housing and food and other basics are critical issues for them. Most were employed in some way for at least part of 2015, since they have income, but they didn’t make much. The system is designed to give them a break on taxes, and it worked.

At the same time, this income inequality has a frustrating consequence: the other half of taxpayers bear almost the entire burden. Note that the top 10% pay 70% of income taxes. The top 50% pay 97%. 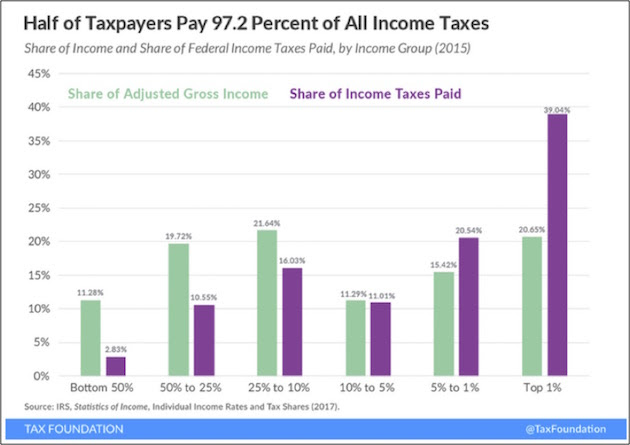 In fact, it favors more than just that bottom half. As the chart shows, everyone except the top 5% pays a lower share of the total income taxes than their share of total income. That’s not necessarily true of every taxpayer, since these are averages, but it’s certainly true for most. The top 1%, which we are often told gets wildly favorable treatment, doesn’t look so lucky by this measure. It only received 20.65% of the income but paid almost 40% of the taxes.

Let me point out again, this tax structure is not an accident. The tax system is designed to produce this result. The public wants the wealthiest Americans to pay a higher percentage of their income, and they do. Provisions that reduce taxes for the middle and lower classes mean those in the top brackets pay more.

Some caveats on this data: It omits payroll taxes, which for those on the lower end are often higher than the income tax. Wealthier people also have more ability to shift income into favorable categories. But in the aggregate, they still pay higher rates on more income than majority of the population does. We have a highly progressive income tax system by any fair definition. The share of tax paid by the top 20% of Americans also changes when social-insurance levies are included. It drops to about 67% of total federal income taxes paid from roughly 87%. (WSJ)