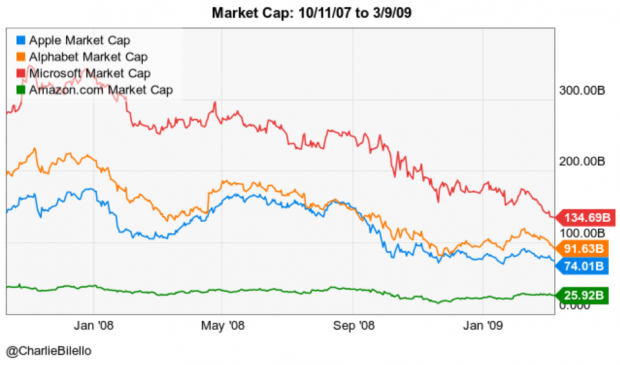 How To Think About Unsustainable Returns

What a difference nine years makes.

Nine years later these four companies would grow to become the largest in the world, with a combined market capitalization of over $3.2 trillion.

They are all key components of the Nasdaq 100 Index, which has become a favorite among investors. Glancing at a table of returns, it’s easy to see why. The index is on pace for its 10th consecutive positive year – which would be a new record – surpassing the epic run from 1991-99. 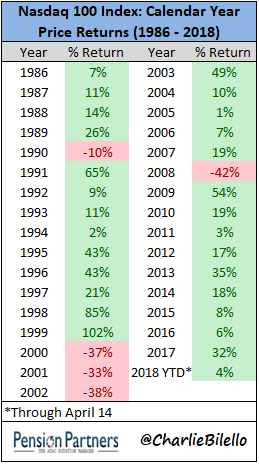 While records are made to be broken, returns like we’ve seen are unsustainable. If the Nasdaq 100 were to repeat its 9-year performance of 23.8% annualized in the next 9 years, large cap tech stocks would own the world. 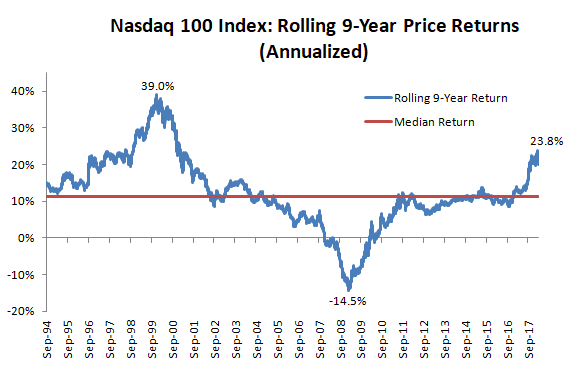 While that may be possible, it’s not probable. We’re much more likely to see returns come down in the years to come as they did following the 1990’s boom. That doesn’t mean they have to crash in the same dramatic fashion, just that the high rate of growth is unlikely to persist.

So how should investors think about unsustainable returns, in any asset class or strategy?

First and foremost: with high degree of skepticism. One should operate under the assumption that such returns will not continue indefinitely but instead succumb to the law of mean reversion. For an existing investor, that means humbly re-balancing your portfolio to increase diversification and control risk. For a prospective investor, that means setting low expectations and wading in only with a high degree of caution. Since you cannot buy past returns they should have no influence on your decision-making process. Focus instead on the future and you’re best assessment of prospective returns.