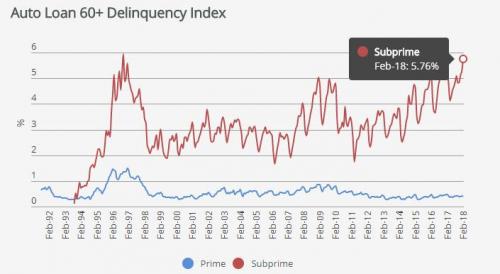 The latest monthly auto-loan data from the Fitch Auto ABS Index showed something very troubling: subprime delinquencies 60 days or more past due on the secondary market rose to 5.76% in February, the highest they’ve been in 22 years, or since 1996, and blowing past the highs hit during the 2008 financial crisis. At this rate, a record high print is assured in a month or two.

The data seemed confusing, almost a misprint to Hylton Heard, Senior Director at Fitch Ratings who said that “it’s interesting that [smaller deep subprime] issuers continue to drive delinquencies on the index in an unemployment environment of around 4%, low oil prices, low interest rates — even though they are rising — and a positive economic story overall.” In other words, there is no logical reason why in a economy as strong as this one, subprime delinquencies should be soaring.

As Brian Ford of Kroll Bond Rating Agency added “the securitized universe is a small subset of the overall universe of auto loans, but it still gives you a pretty good indication of the health of the consumer.” If that is the case, the US consumer is doing far worse than the near-record S&P and 4.0% unemployment rate would suggest.

Making matters worse, rising interest rates have made interest payment on subprime loans increasingly unserviceable for those who are currently contractually locked up – hence the surge in delinquency rates – or those US consumers with a FICO score below 620 who are contemplating taking out a new loan to buy a car, something we touched on three weeks ago in “Subprime Auto Bubble Bursts As “Buyers Are Suddenly Missing From Showrooms.”

Yet while the subprime bubble is clearly bursting on the demand side, courtesy of rising rates and a 3M USD Libor above 2.3%, Wall Street has remained relatively sanguine on the broader financial implications for one reason: there is, allegedly, no concentration in exposure among bank lenders, and thus no concern of a rerun of the subprime bubble bursting on Wall Street similar to 2007/2008. To be sure, following the financial crisis, big banks appeared to have learned their lesson and turned rather conservative when it comes to potential subprime borrowers, insisting on such things as income verification and other details, which has made room for specialty lenders with fewer such compunctions.

Meanwhile, as we highlighted two weeks ago, Wall Street’s exodus from the sector meant a gaping market share opportunity, which led to the emergence of scores of “nonbanks”: smaller, specialized subprime auto lenders, some backed by private equity firms looking for leverage upon leverage. These lenders make money by borrowing from big banks to fund various high-interest loans to subprime customers. The interest margin, or difference between the rates banks charge those lenders and the rates lenders charge their subprime customers (often in the double digits) is their profit.

However, even here the breaking point appears to have been reached: as we Subprime Auto Bubble Bursts As “Buyers Are Suddenly Missing From Showrooms, three of them – Summit Financial Corp, Spring Tree Lending, and Pelican Auto Finance – recently collapsed into bankruptcy or were shut down. Allegations of fraud and misrepresentations are swirling through the bankruptcy filings.