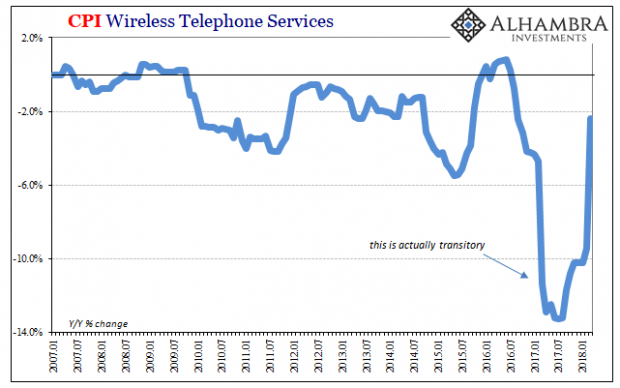 As it turns out, those “transitory” inflation factors were worth only about 25 bps on the core CPI rate. This isn’t at all surprising and was as usual entirely predictable. But when you don’t have any answers there is a lamentable tendency toward denial or deliberate evasion, even if that leads toward the ridiculous.

Base effects are a part of economics (small “e”). The real world isn’t smooth. The attempt to make it so is understandable but calculations will always be fraught with lumpiness. There is just no way around it. How we treat that unevenness does matter, however, demonstrating as always that interpretation is usually what’s at issue.

Verizon Wireless entered the cellphone wars in March 2017; or, that’s when their rollout of unlimited data across their plans registered in the CPI components for wireless telephone services. The index for that small piece of the consumer “bucket” was 52.679 in February 2017 (not seasonally adjusted), then dropped to 49.002 upon the introduction of this actually transitory factor. 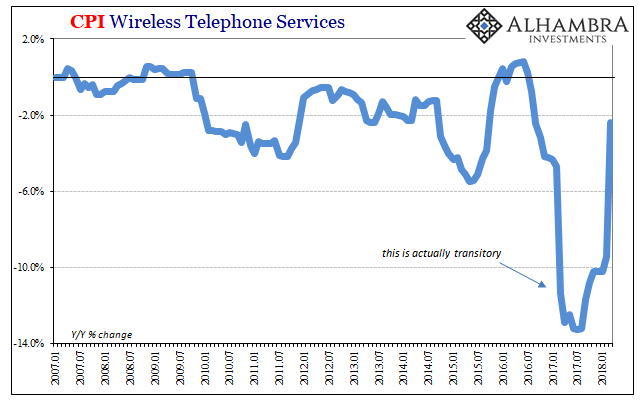 The year-over-year change here went from -4.7% last February to -11.4% last March. At the same time, the core CPI which had increased 2.22% in February 2017 over February 2016 gained only 2.00% in March. Two months later, Verizon was to hit the Fed’s meeting minutes, the latest factor to have registered for the FOMC as “transitory.”

March 2018 marks an entire calendar year since all that, meaning that any lingering base effects are now removed. The CPI for wireless telephone services dropped 9.4% year-over-year in February but was only -2.4% last month. The core CPI rate which had increased 1.85% two months ago rose by 2.12% in March. About 25 bps, give or take, each way. 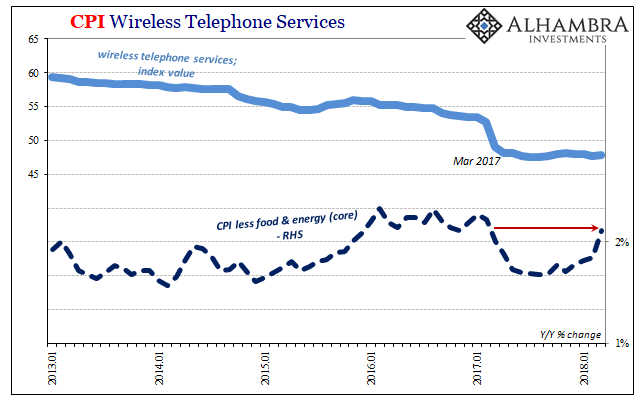 It’s not quite how this was made out to be, or how it was supposed to go. The implication of using the word “transitory” is clear enough; that when it is expunged from the record the result will be conformity in every sense. If this temporary problem is to blame for still another year of undershooting inflation, then passing beyond its reach should do what?