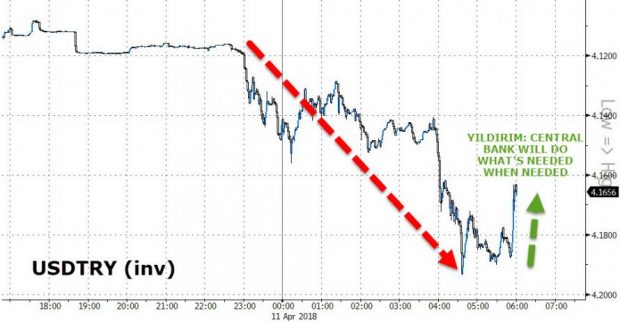 Lira Bounces As Turkey Reaches “Whatever It Takes” Moment

It appears Turkey just reached its “whatever it takes” moment as Prime Minister Binali Yildirim warned that“speculative attacks on our economy are being made,” and promised “the central bank will do what’s needed, when needed” in fight against inflation.

The Lira bounced modestly on the headlines…

As we detailed earlier, two days ago we noted the rapid acceleration of the demise of Turkey’s currency and bond markets, as Erdogan promised “to rescue investors from high rates” prompting (hyper)inflation concerns and central bank independence anxiety among investors. 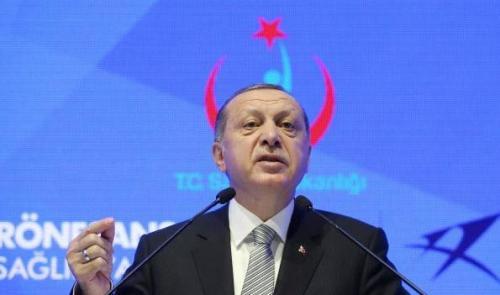 Since then it has got worse, much worse…

The Turkish lira extended a slide to fresh record lows as wagers mount the central bank may hesitate to defend the currency with higher interest rates.

Bloomberg reports that Piotr Matys, a strategist at Rabobank, notes that while the monetary authority can stop, or at least slow down the pace of the lira’s depreciation,

“it is also a well-known notion among market participants that Governor Cetinkaya may have limited room to raise rates in the current domestic environment.”

“Only a few weeks ago my 4.20 target for USD/TRY I’ve had for a few months looked ambitious. I was also a bit worried that I could be too bullish on EUR/TRY expecting 5.12,” he said.

“We are not that far from those targets, which shows how quickly things can deteriorate.”

Why should the average joe American investor worry about what’s going on in Turkey?

As Fasanara Capital’s Francisco Filia explains, the catalyst for a deep repricing in markets can be entirely endogenous, within the space of its dangerous and fragile market structure.

Alternatively, the list of exogenous catalysts is famously getting longer by the way: trade wars / capital wars between the US and China, political and geopolitical uncertainty, policy normalization (QT), inflation reborn, debt and deficits, etc