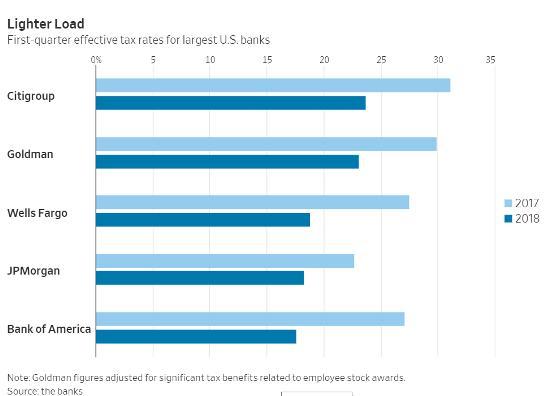 No (Wall Street) Bank Left Behind

Times have been hard for Wall Street banks lately, what with record amounts of cash pouring in and causing all kinds of bookkeeping headaches. So — big-hearted people that we are — Americans stepped up and helped by lowering the banks’ taxes. From Today’s Wall Street Journal:

The Four Biggest U.S. Banks Made $2.3 Billion From Tax Law—in One Quarter

Big banks just cashed in the first installment of benefits corporate America will reap from the new federal tax law.

That is how much the combined earnings of the four major national banks— JPMorgan Chase, Wells Fargo. Citigroup, and Bank of America, — increased in the first quarter because of the lower corporate rates under the tax-overhaul law enacted in December, according to an analysis of the banks’ results by The Wall Street Journal.

That amount is only a modest-size chunk of the banks’ total first-quarter earnings—less than 10% of their combined net income applicable to common shareholders. But it comprises a major chunk of their year-over-year earnings growth.

Without the tax savings resulting from the new lower corporate tax rate, Wells Fargo’s earnings would have declined from a year ago instead of increasing, and much of the year-over-year growth at Citigroup and Bank of America would be gone. At JPMorgan, losing the tax bump would have cut its earnings growth to 28% from 35%.

The $2.3 billion boost isn’t the entire story. For one thing, other provisions of the tax law prompted some of the same banks and many other companies to take big charges against their earnings in the fourth quarter. From that perspective, the first-quarter boosts merely help even things out.

The Journal’s analysis calculated what each bank’s results for the latest first quarter would have been if the effective tax rate from last year’s first quarter was still in effect.

Each bank’s tax rate has declined dramatically since then. Wells Fargo, for instance, had an 18.8% effective tax rate in the latest first quarter, down from 27.5% in the year-ago quarter. Applying a 27.5% effective tax rate to the latest quarter’s pretax income would have shaved about $636 million off earnings, cutting Wells Fargo’s diluted earnings per share to 99 cents from the actual $1.12. (Wells’ first-quarter 2017 earnings were $1.03 per diluted share.)

While all four banks disclosed the figures for their current and year-ago pretax income, excluding the effect of taxes altogether, Bank of America highlighted them in the headline of its press release, noting that its pretax income had risen 15%, even as its diluted EPS rose 38%.

Mr. Gomatam notes not all companies will see the kind of tax-rate reductions the big banks did, and some tax savings could go to a company’s customers or employees rather than profits. Investors “need to see that all of the tax savings are falling to the bottom line.”

Investors may have looked through the numbers and realized that much of the banks’ earnings growth came from a tax cut, not from operations. In the two trading days since the first big U.S. banks announced earnings Friday morning, Wells Fargo shares fell 3.6%, JPMorgan’s slipped 2.8% and Citigroup’s lost 2.9%.