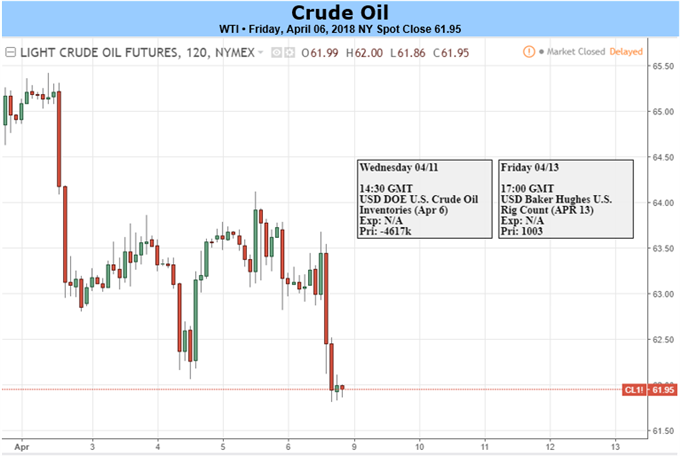 Crude oil prices came under pressure this past week as trade war fears and an overall decline in sentiment overshadowed developments on the production and inventory front. During the beginning of the week, US stocks were in the red coming out of a holiday, weighed down by the technology sector as President Donald Trump continued to attack Amazon.com.

Oil prices though rebounded a later on as EIA inventories fell by the most since early January. Saudi Arabia also unexpectedly increased the price of its Arab Light crude afterwards. Then, towards the end of the week, the mood suddenly turned sour once again as Mr. Trump ordered the consideration of additional $100b of tariffs on China goods. Crude oil quickly reversed the progress it made in the prior days.

The week ahead is loaded with event risk for oil. Starting with the usual, API inventory estimates could give an idea of what’s to come on Wednesday when official EIA data crosses the wires. In addition, keep an eye out for March’s US CPI report which is also due on the same day. Headline inflation is expected to rise by the most in one year at 2.3% y/y. If the US Dollar rises on such an outcome, oil prices could fall since they are denominated in USD terms on global markets.

Aside from those, on Tuesday the International Energy Forum will be held in New Delhi. There, OPEC’s Secretary Mohammad Barkindo and Russia’s Energy Minister Alexander Novak will be present. One of the topics is global market shifts and energy transition shaping the future of energy security. A prominent agenda given the rise of fully electric vehicles which threatens the use of petrol to a certain extent. Perhaps we can get an idea of what the outlook for oil consumption could be amidst this.