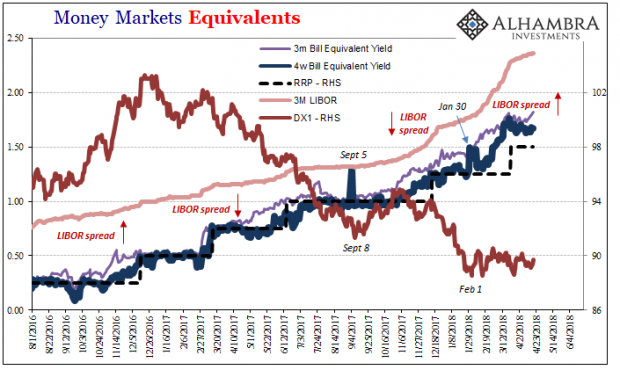 It’s worth revisiting the topic of the “rising dollar.” What determines its exchange value in the first place? Orthodox convention associates the general direction up or down with interest rate differentials, the infamous global carry trade. Not just any interest rate comps, either, but those of short-term money markets.

Thus, if the Federal Reserve is “raising rates” as it has been while other central banks hold their rates steady or increase them less robustly (as in, say, Hong Kong) the favorable spread in US$ rates should be dollar positive.

But that’s not what happened last year. As we well know, the “weak” or “falling” dollar took hold early on in 2017 just as US monetary policy became more assertive (relatively speaking). Since February 1, 2018, that has changed to where DXY has moved sideways even though “dollar” money rates have drawn higher with and without the Fed’s influence.

In retracing the liquidations of January/February, we can add one more piece to them. As noted before:

To those we can put down one addition step, or change: DXY stops falling February 1. 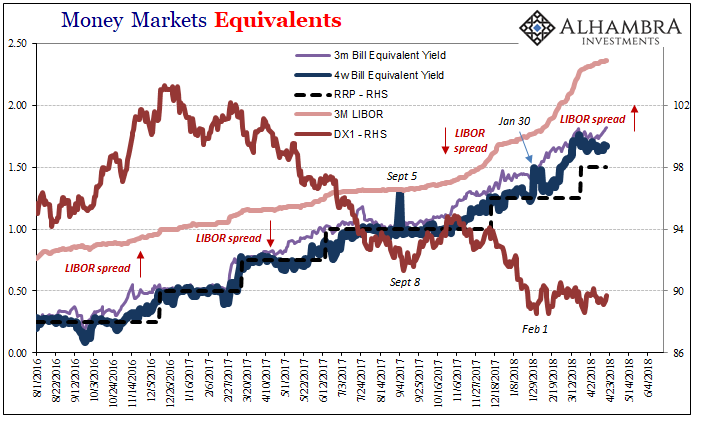 It repeats the action from early September, too. Stocks weren’t liquidated then as they were starting in January, but the 4-week bill was on September 5. That same week repo fails spiked and DXY actually began a counter “rising” trend. It was also the same time that CNY reversed to mirror HKD’s sharp strengthening.

There may not be much actual volume in unsecured markets, but despite continuous demonization of LIBOR there obviously remains some information content in the fixings. A rising LIBOR spread, as in 2007-08, depicts rising liquidity risk perceived by banks operating across the whole global funding complex. Translating that into the dollar exchange, it’s an increase in pressures that indicates “dollar” funding is harder to come by globally. Increase demand or decrease supply, or both, should lead to the “dollar’s” rise as a matter of simple economics (small “e”).