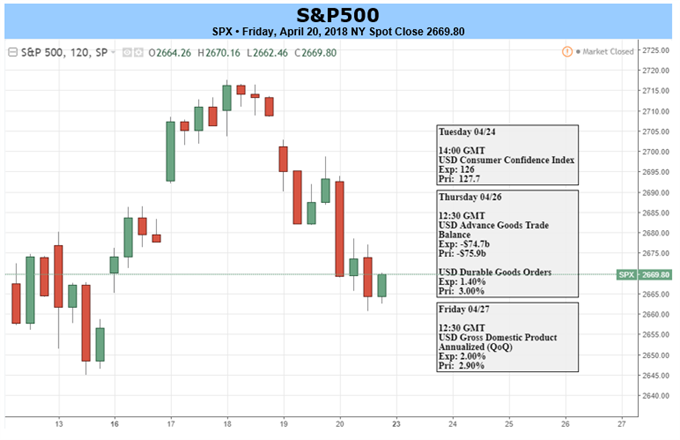 Looking ahead to the calendar next week there are a few nuggets of ‘high’ impact data. On Tuesday, we have Consumer Confidence, then on Thursday Durable Goods and the Trade Balance, and to finish the week on Friday we have the release of Q1 GDP figures. For estimates and release times, check out the economic calendar. There is always geopolitical headline risk to keep an eye on as well.

The S&P made an attempt to rally last week, but then turned lower to post a weekly reversal bar. This hints at further downside in the week ahead, but market conditions have been somewhat choppy since trading around the 200-day and February trend-line. On any move lower which develops keep an eye on how support holds up, it’s an important line-in-the-sand for the broader outlook. Looking higher, last week’s high at 2717 clocks in as resistance followed by the trend-line off the record high. 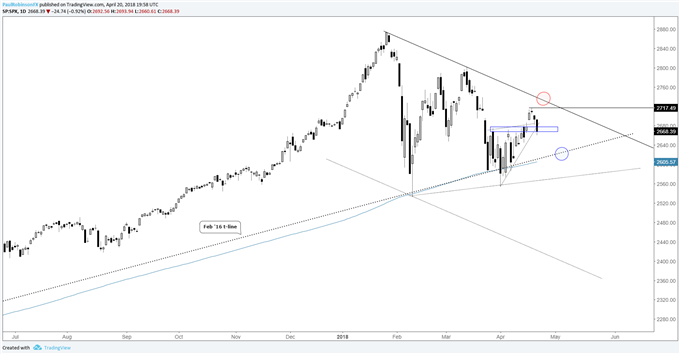 The key event of the week is the ECB meeting on Thursday, however; the outcome isn’t anticipated to cause much of a stir in the market with no expectations of the central bank making any moves or signaling such. As per usual, though, vigilance is prudent. Friday brings German unemployment data, but not likely to move the needle for the DAX. See the calendar for release details.

Last week, the DAX pushed a bit higher but found sellers just under the 200-day MA and failed to close above a swing-high created in February. Should we see more strength there is not only the 200-day, but sizable price resistance from 12745 up into the mid-12850s. It seems likely a stall and pullback could be in order. Outlook in the near-term, though, remains relatively uncertain at this juncture.