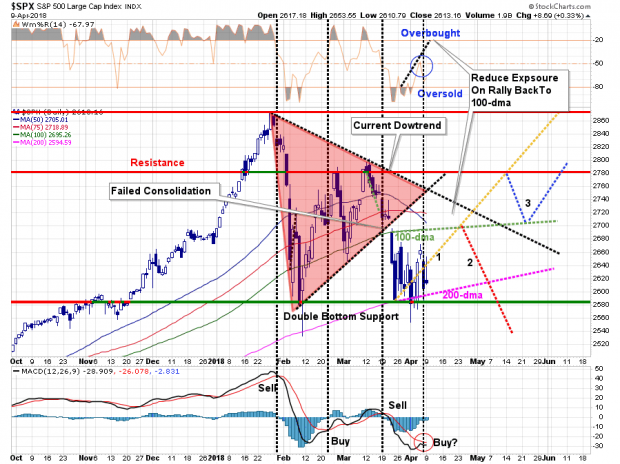 In this past weekend’s newsletter, “Bulls Hang On By A Thread,” I suggested a rally was likely due to the short-term oversold conditions that currently existed. To wit:

“For now, we want to give the bulls the benefit of the doubt, but that ‘bit of rope’ is awfully frayed at this juncture. If the market hits our target zone or breaks support, as shown below, we will reduce portfolio ‘risk’ further.”

“My best guess, at the moment, is that ‘someone’ may well try and talk ‘the Donald’ off his aggressive posture over the weekend. If the markets get some ‘relief,’ a rally back to resistance is likely.”

By Monday morning, the catalyst was in place as statements made by Trump over the weekend, which were described as conciliatory, sent the markets rallying early on the hopes a U.S./China trade war could be averted. 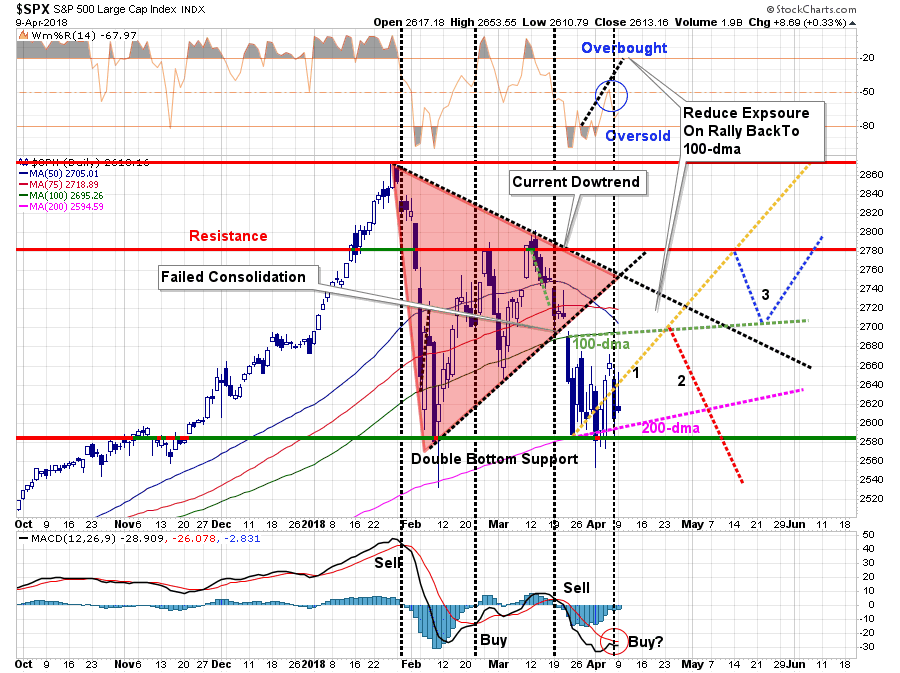 However, while the reflex rally was nice, most of the gains were lost by the close as concerns rose of the FBI’s raid of the office of Michael Cohen, Donald Trump’s attorney, searching for communications between Cohen and the President.

More importantly, the failure to break out of the current downtrend channel is rapidly pulling the 50-dma towards a cross of the 100-dma. Such a downside cross will be “just another brick in the wall” for the continuation of the bull market in the short-term. (My apologies to Pink Floyd.)

The good news is that futures are pointing sharply higher this morning and we should have another shot at a rally. If we can hang on to the rally, it should bring us very close to registering a “short-term buy signal.” Such a signal should theoretically provide enough “gas” to the market for a rally back to the 100-dma or even the previous downtrend line.

I highly suggest you use any substantial rally to reduce risk and rebalance portfolios accordingly.

Why? Because I am going to out on a limb and making a call.

“I think the 9-year old bull market may have ended in February.”

I could be wrong. Actually, I hope that I am because managing money is far easier when markets are rising.

However, as I was writing the newsletter, there was a moment of clarity as I penned a list of challenges weighing on the economy, and the markets, which are very different from where we were back in 2009 or even in 2016.

“In 2015, the market plunged as Fed Chair Janet Yellen brought QE3 to its conclusion and started hiking interest rates for the first time in 9-years. Again, this correction would likely have been substantially deeper as the Eurozone faced “Brexit” which sent shocks through the market. The well-timed phone calls to the Bank of England and the European Central Bank by then Fed Chairman Yellen, to take over liquidity operations stemmed the decline. Also as opposed to 2000 and 2007, the Fed had only just started its rate-hiking campaign.”