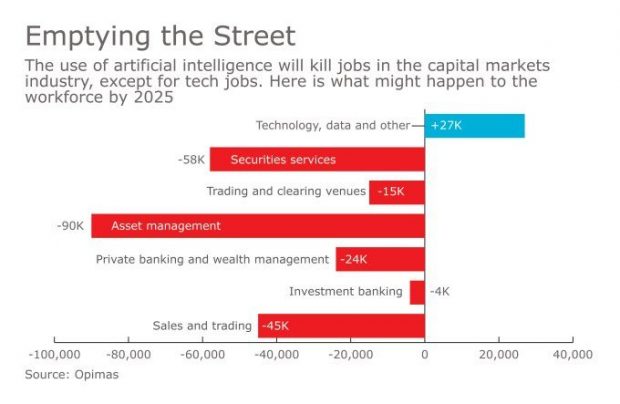 I was having a chat about Artificial Intelligence (AI) in banking the other day. It was an interesting conversation, although most of the examples were for customer service via Chatbots, which doesn’t impress me much. I know that systems like Erica, short for Bank of AmErica, are up and running to make life easier, but hey google, pay my mate $50. Sorry, I meant Alexa, Siri, Cortana, whoever.

I’m much more intrigued by heavy-duty AI. The sort that gets us towards Ex Machina or HAL. It’s coming. I already cite examples like JPMorgan’s AI system that wiped out 360,000 hours of legal work overnight, and UBS’s high net worth system that does in a second what took humans 45 minutes to administer.

For me, this is the power of AI in banking, as it is tackling the low-hanging fruit of manual administration within the bank. Banks have always sought cost savings with technology and this sort of technology offers a lot. It is why the Deutsche Bank CEO John Cryan says that half of the bank’s employees will be wiped out by machines in the not too distant future, as the humans’ jobs are just to be abacuses.

In fact, a recent
American Banker article cites research by Optimas that shows 230,000 jobs disappearing in capital markets over the next seven years. 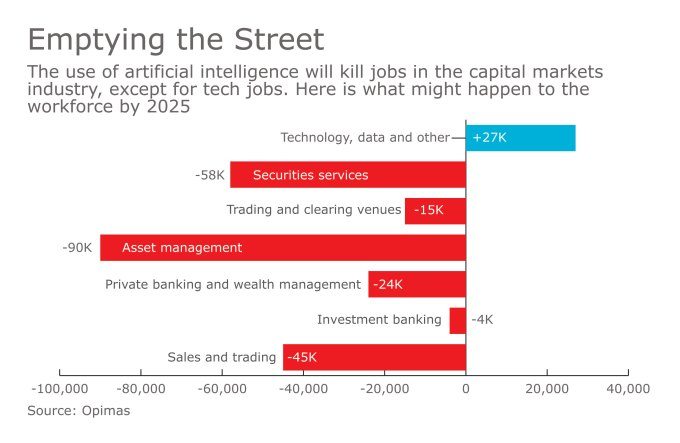 This gets everyone worried and up-in-arms. Oh, machines are going to wipe out our jobs? What will we do?

My response is that most of the jobs of the next century haven’t been invented yet, and old jobs will be replaced by new ones. If we’d told our grandfathers that only 1 in 100 of them would be working on a farm, but we’d have 100 times as much food, they’d have thought you crazy and sent out the lynch mob. But that’s where we are today. 100 years from now, who knows?

I mean there are already many new jobs replacing old ones in finance, just look at FinTech. Work is blossoming across the tech world, in AI and Blockchain specifically, and generally across the Internet of Things. This is why the jobs of the future are ones that require coders. Coders are the 21st century’s rock stars, and being able to code today is as important as being able to speak English.