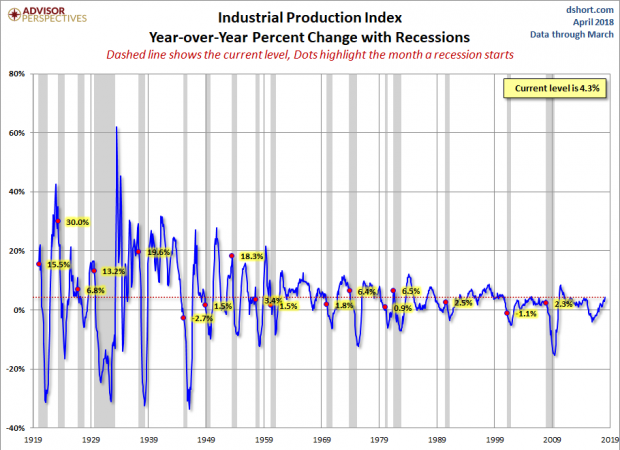 The Big Four Economic Indicators: Industrial Production Up 0.5% In March

Today’s report on Industrial Production for March shows a 0.5% increase month-over-month, which was better than the Investing.com consensus of 0.3%. The year-over-year change is 4.33%, down slightly from last month’s YoY increase. The indicator is currently at an all-time high.

Here is the overview from the Federal Reserve:

Industrial production rose 0.5 percent in March after increasing 1.0 percent in February; the index advanced 4.5 percent at an annual rate for the first quarter as a whole. After having climbed 1.5 percent in February, manufacturing production edged up 0.1 percent in March. Mining output rose 1.0 percent, mostly as a result of gains in oil and gas extraction and in support activities for mining. The index for utilities jumped 3.0 percent after being suppressed in February by warmer-than-normal temperatures. At 107.2 percent of its 2012 average, total industrial production was 4.3 percent higher in March than it was a year earlier. Capacity utilization for the industrial sector moved up 0.3 percentage point in March to 78.0 percent, a rate that is 1.8 percentage points below its long-run (1972–2017) average. [view full report]

The chart below shows the year-over-year percent change in Industrial Production since the series inception in 1919, the current level is lower than at the onset of 8 of the 17 recessions over this time frame of nearly a century. 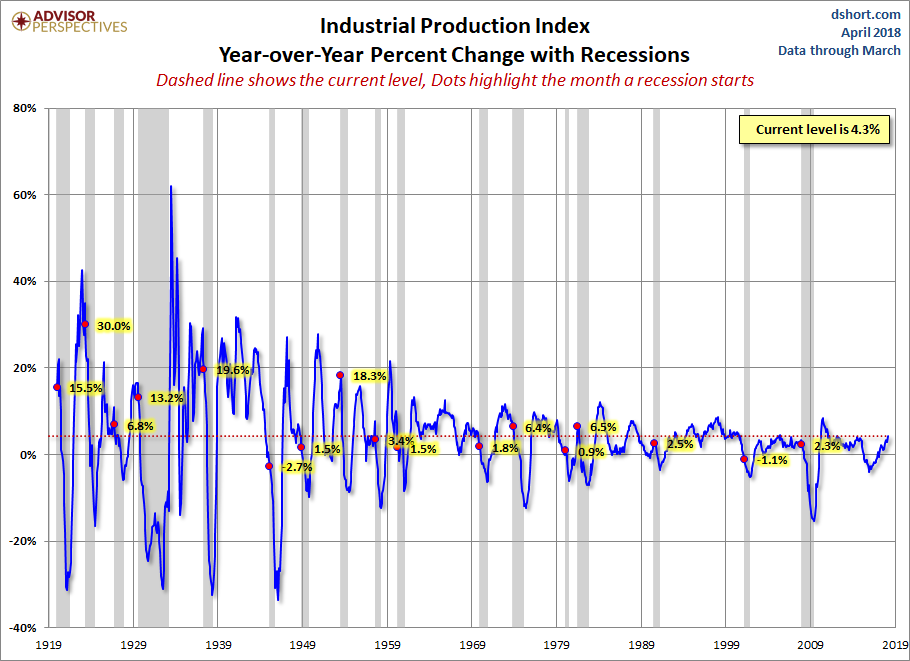 The Fed’s monthly Industrial Production estimate is accompanied by another closely watched indicator, Capacity Utilization, which is the percentage of US total production capacity being used (available resources includes manufacturing, mining, and electric and gas utilities). In addition to showing cycles of economic growth and demand, Capacity Utilization also serves as a leading indicator of inflation.