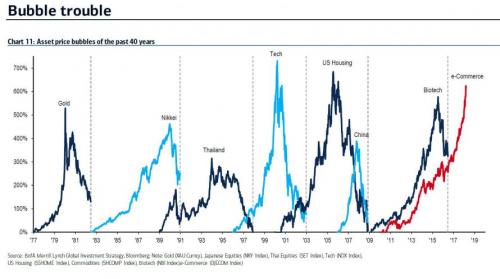 “The Bubble Is About To Burst”: BofA’s 10 Reasons To Sell Tech Stocks

In a report that explains the recent market volatility as having nothing to do with Trump-induced nausea and everything to do with the Fed, BofA’s Michael Hartnett moves away from listing the latest tactical and cyclical market drivers which we covered earlier, and lays out what the Chief Investment Strategist thinks are the three big secular trends threatening investors in 2018. (“We believe the simple reason that risk assets are struggling in 2018 is the Fed. Investors have been forced to acknowledge a tightening cycle is well underway”)

These are as follows:

Combining these, the result over the next few months could be nothing short than the second bursting of the tech – or technically e-commerce – bubble.

Recall that two weeks ago, we first showed that according to BofA, we are now witnessing the third biggest bubble in history created by a central bank. As Hartnett wrote, “the lowest interest rates in 5,000 years have guaranteed a melt-up trade in risk assets”, which Hartnett has called the Icarus Trade since late 2015, and points out that the latest, “e-Commerce” bubble, which consists of AMZN, NFLX, GOOG, TWTR, EBAY, FB, is up 617% since the financial crisis, making it the 3rd largest bubble of the past 40 years, and at this rate – assuming no major drop in the 6 constituent stocks – the e-Commerce bubble is set to become the largest bubble of all time over the next few months.”

The problem is that lasting even a few months with a “major drop” in the e-commerce bubble may prove very problematic, largely due to what Hartnett calls “Occupy Silicon Valley”, which he explains as follows:

The economic & social disruption of technology is unlikely to stop. It has many beneficial economic & social impacts. But the sector’s growth, power & visibility make it extremely vulnerable to increased regulation & taxation, most especially if recession wrecks government finances.