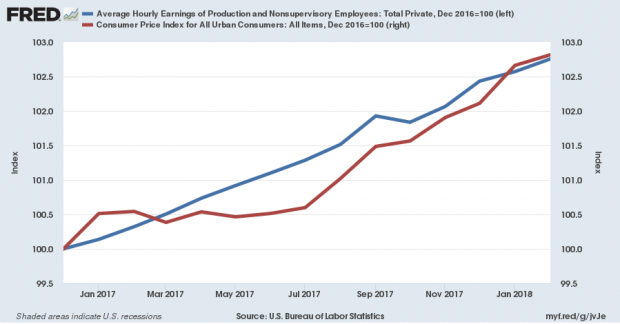 The Delusions Of MAGA, Part 2

We began Part 1 with the Donald’s bogus tax day boast that the American economy has come roaring back. But that falsehood merits further debunking because it succinctly embodies the kind of context-free, anti-historical, bad money-populism that prevails on both ends of the Acela Corridor.

On this Tax Day, America is strong and roaring back. Paychecks are climbing. Tax rates are going down. Businesses are investing in our great country. And most important, the American people are winning.

Au contraire. The US economic expansion is not roaring; it’s still stumbling into debt-ridden old age—fixing to be battered by another round of collapsing financial bubbles and payback for growth stolen from the future.

For example, since December 2016 paychecks have been “climbing” alright—-but as a factual matter, they are up by the very same 2.8% as the CPI. That is to say, real earnings have gone exactly nowhere during the last 15 months. Likewise, there is nothing special to write home about with respect to the Donald’s claim that “businesses are investing in our great country”.

Well, yes again, but at no faster rate than before. As is evident in the chart below, business investment during a recovery tends to pulse forward in short-term mini-cycles. Accordingly, there is really nothing new in the trend that has prevailed since the recovery gained its footing in the second half of 2010.

The only thing different last year was the timing of the pig-in-the-python effect. As seen in the chart, CapEx surged during the 2014-2015 global commodity and trade boom; then gave way during the subsequent 2016 bust, and finally rebounded modestly during 2017—-helped not a little by the weaker dollar, energy investment recovery and the global capital spending upturn triggered by Mr. Xi’s pre-coronation credit boom.