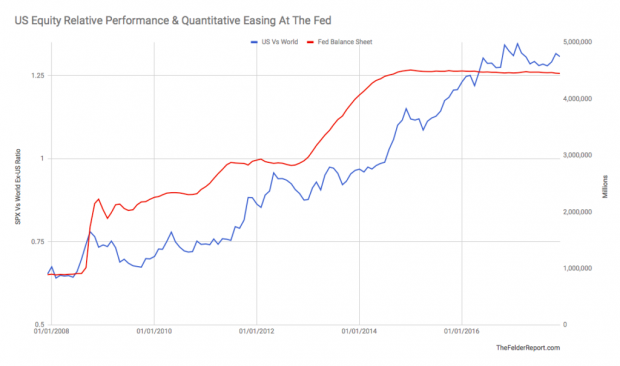 The U.S. Stock Market’s Impressive Outperformance May Be Coming To An End

Since putting in a major bottom in 2009, the U.S. equity market has dramatically outperformed the rest of the world. This may have something to do with the fact that the Fed explicitly encouraged greater risk-taking on the part of investors by buying up trillions of dollars of risk-free instruments over that span. But now that this unprecedented balance sheet expansion has come to an end the relative outperformance of U.S. equities appears to be coming to an end, as well. 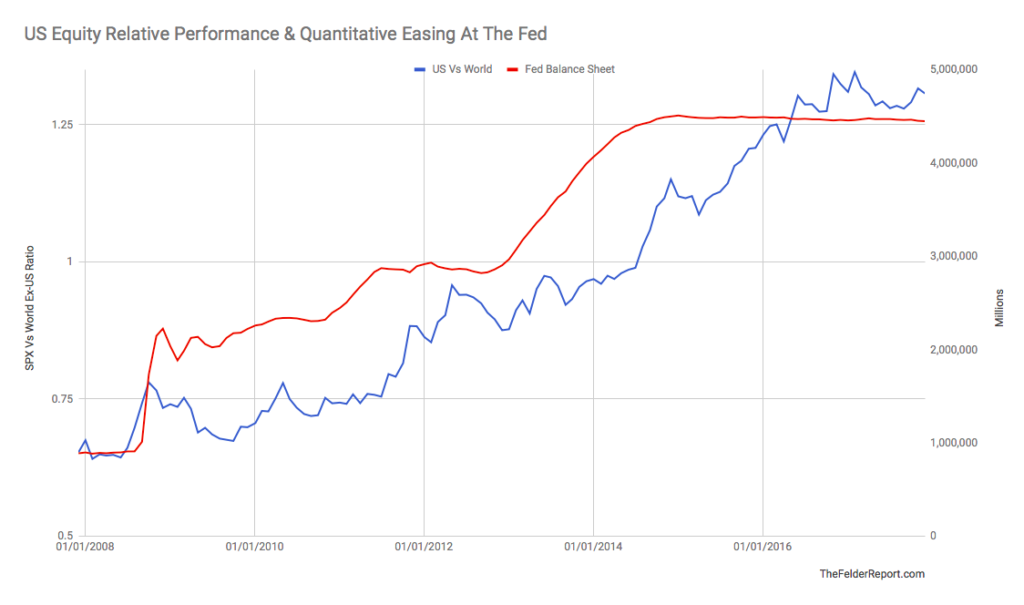 The U.S. stock market is now the most expensive developed market in the world. Using the “Buffett Yardstick,” market cap-to-GDP, not only have we eclipsed the peak set during the dot-com mania we have also eclipsed the Japanese peak set back in 1990 which has resulted in 28 years of losses for investors over there… so far. 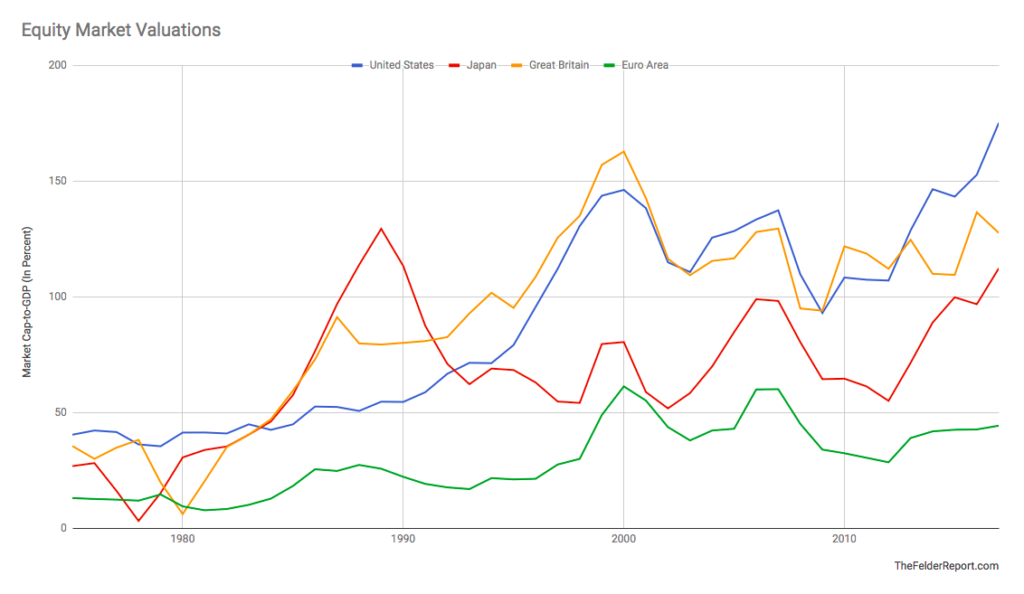 The disparity between U.S. equity market valuations and that of emerging markets is even more dramatic. Brazil, Russia, India, and China, also known as the BRICs, are all far cheaper than our own stock market currently. It’s true that this valuation disparity has been evident for some time. However, aside from the major shift from quantitative easing to quantitative tightening, there are now clear technical reasons investors should consider a major shift in the relative outperformance of U.S. stocks. 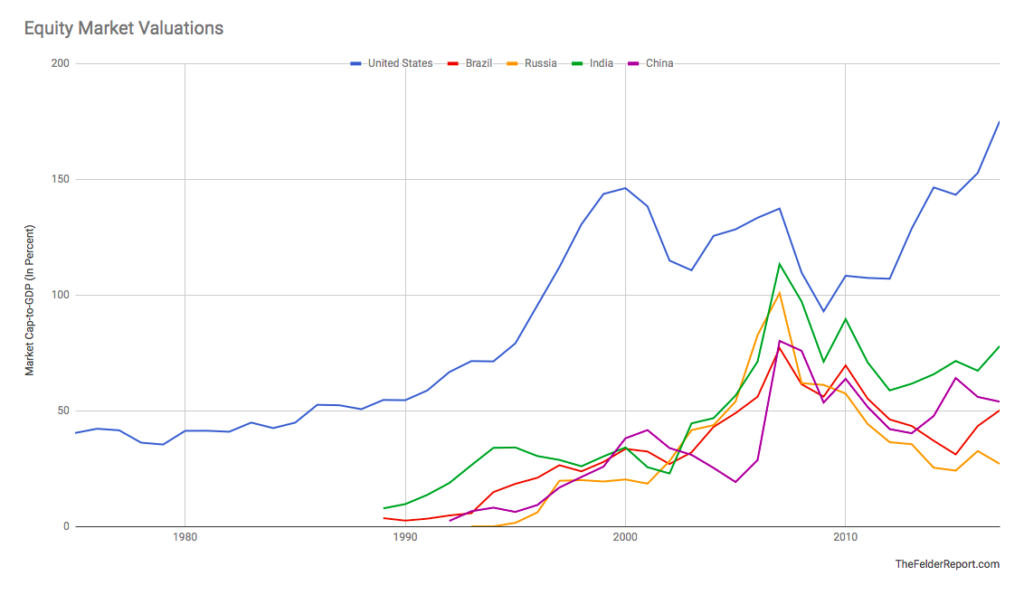 The quarterly chart below plots the ratio of the S&P 500 to world equity markets ex-U.S. In mid-2009, we had a clear bullish divergence in momentum which kicked off the outperformance we have witnessed for nearly a decade now. Currently, we see the opposite momentum signal. Additionally, this comes after a DeMark Sequential sell signal back in late-2016 which also suggests a potential long-term exhaustion of this powerful relative uptrend. 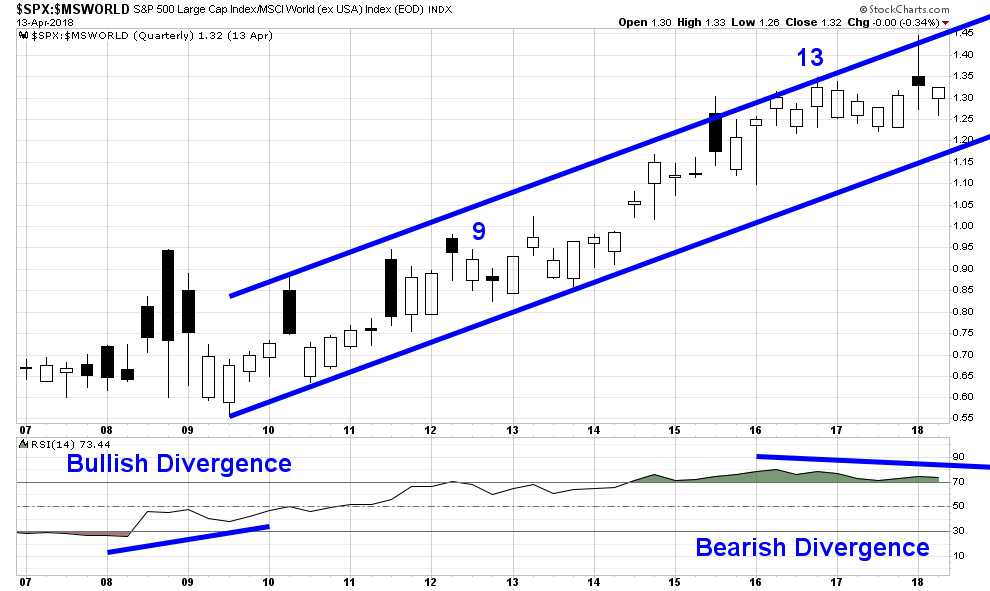 The bottom line is U.S. stocks are not just extremely expensive relative to their own history, they are extremely expensive when compared to every other stock market around the world. If “the price you pay determines your rate of return,” as Warren Buffett likes to say, then investors overweighting U.S. equities today are likely to be very disappointed with their relative returns in the future. What’s more, technical signs suggest this disappointment could begin sooner rather than later.