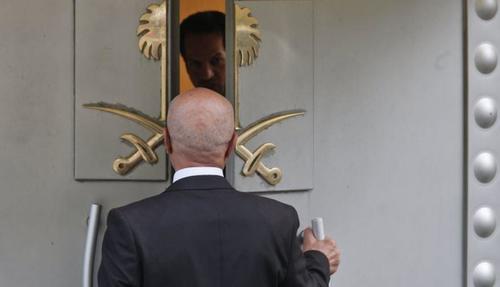 This Is The Worst Case Scenario If Investors Dump Saudi Arabia

So many Wall Street CEOs and other titans of investing and industry have pulled out of next week’s “Davos in the Desert” conference that even the Ritz-Carlton, owner of the Riyadh venue hosting the conference (as it did last year), has been slammed by human rights groups over its continued support for Crown Prince Mohammad bin Salman and his brutal regime.

In perhaps the biggest blow to the conference’s clout, Treasury Secretary Steven Mnuchin has opted not to attend, even as President Trump has insisted that Saudi Arabia’s story about the circumstances surrounding the (now confirmed) death of critical journalist (and former government insider) Jamal Khashoggi is “credible”. To deflect blame away from MbS, the Saudi leadership has orchestrated a purge of the country’s senior intelligence apparatus and arrested 18 other Saudi nationals for their “involvement” in orchestrating and carrying out the killing. And in the mother of all ironies, the royal family has tasked MbS with running a ministerial committee responsible for restructuring the Saudis foreign intelligence service.

Though Silicon Valley and Wall Street would probably have you believe that they aren’t simply ready to “forget” about Khashoggi, the reality is slightly more nuanced. But the simple fact is that both industries have become too reliant on Saudi money to simply walk away, as Bloomberg and the New York Times laid bare in a batch of stories that exposed this corporate indignation as little more than posturing.

But that doesn’t change the fact that Saudi Arabia’s economy is reliant on foreign money, without which it would grind to a halt (imagine what would happen if foreigner buyers of Saudi oil simply walked away?). While the Saudi Tadawul All Shares Index has rebounded off its lows, many investors are worried about what impact Khashoggi’s killing could have on MbS’s “Vision 2030” initiative, as well as his plans to build a high-tech megacity (tentatively named NEOM).