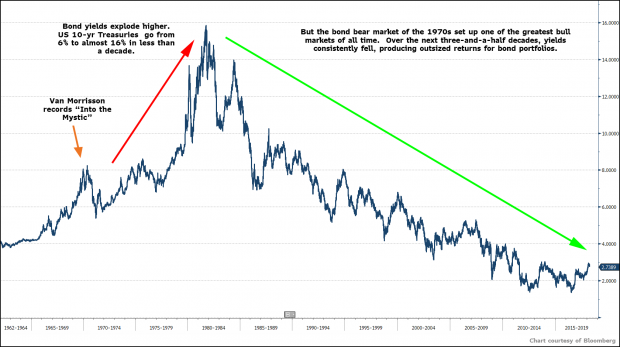 Too Late To Stop Now – The Case Against Bonds

Van Morrison “Into the Mystic”

Although Ireland punches well above its weight when it comes to musicians, Van Morrison is a name that regularly comes out on top. According to a poll published by the BBC, the song most listened to by doctors performing surgeries was “Into the Mystic.” Tough to argue with that choice. Just a terrific tune. The song’s poignant phrase is near the end when he sings “too late to stop now…” Van Morrison must have liked it too as he named his iconic 1973 tour after the lyric.

As he traveled the globe that summer, the changes that were occurring in the financial markets were probably far from his thoughts. After decades of relatively tame inflation, the Consumer Price Index was about to take off to levels never seen during peacetime. In so doing, bond prices would be absolutely decimated. Yet this collapse in bonds would set up one of the greatest bull markets in the history of finance. During the ensuing decades, global government bond yields declined from the double-digit levels of the late 1970s to almost zero today.

But this bull market has had tremendous repercussions on the financial system. Understanding the past is crucial to predicting the future. It helps us come to terms with the fact that just as Van Morrison sang “too late to stop now,” we become addicted to debt and low rates without an answer to the question – how do we stop?

There are significant portfolio management implications from the potential end of the 35-year bull market in bond prices. 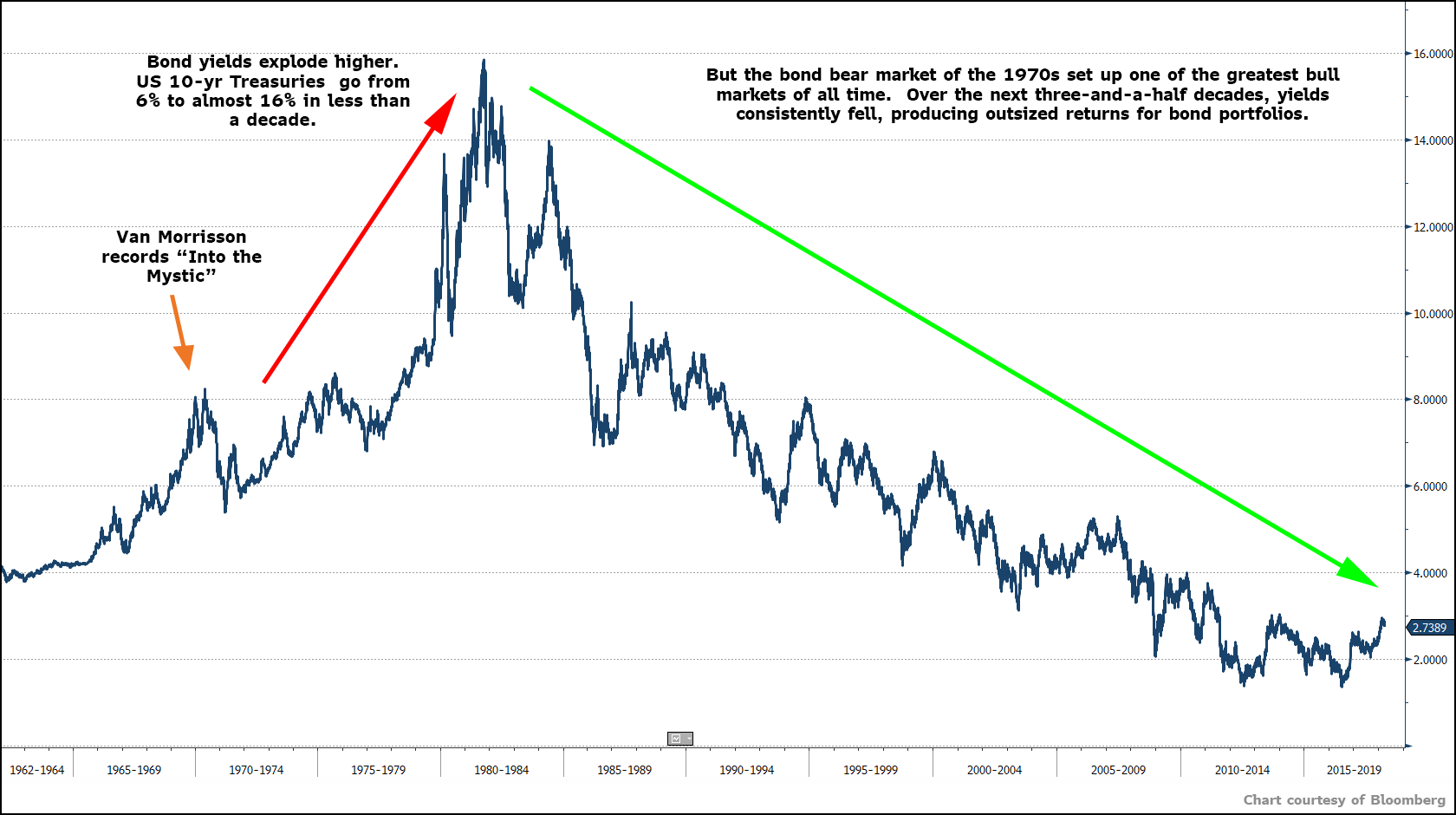 Setting up the greatest bull market of the past half-century

In 1962, more than a half-century ago, the US 10-year Treasury yield was trading around 4%. The CPI inflation index was running around 1% and the real yield earned by lending money to Uncle Sam was positive 3%. Investors could outpace inflation and accumulate a little wealth through traditional bond purchases.

LBJ’s “Guns and Butter” spending, which led to President Nixon taking America off the gold standard, combined with the OPEC oil embargo crisis set the stage for the great inflationary period of the late 1970s. The large cohort of young baby boomers that were just starting families threw fuel on the fire. 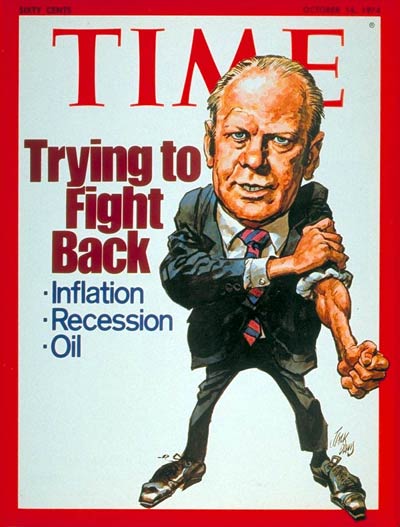 A few short years into the early 1970s inflation went from being under control and benign to completely unpredictable and dangerous.

The CPI inflation index spiked to 12% in late 1974 and was followed with an even bigger surge in 1980 when inflation ticked at just a shade under 15%.

Government officials attempted to get a handle on it but the vicious self-reinforcing cycle of inflation begetting more inflation had firmly entrenched itself into the psyche of the public. Bond yields spiked but not nearly high enough to compensate for the even higher inflation. Real yields (the rate of US treasury bonds minus inflation) plummeted into negative territory. 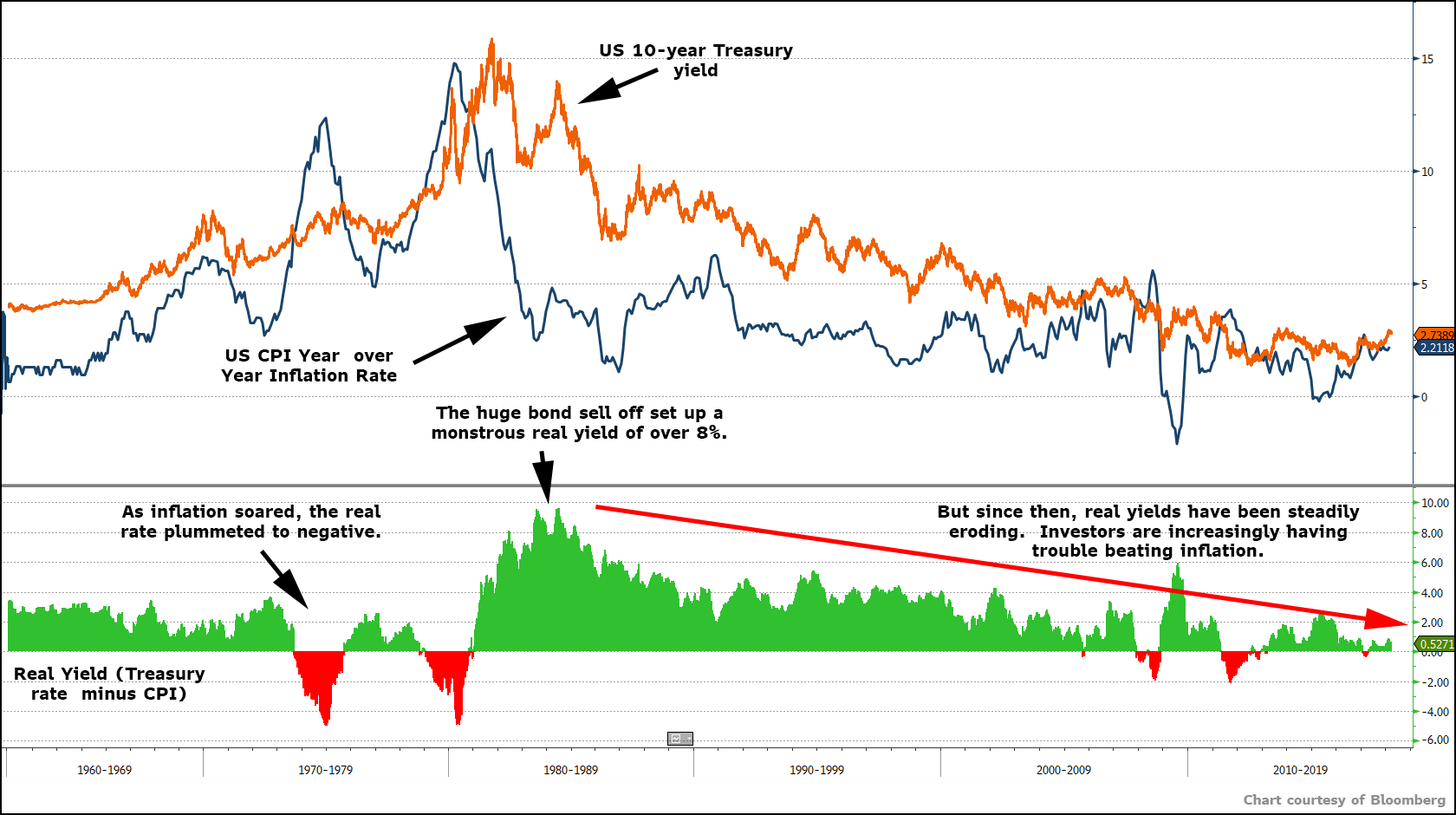 Then, amidst this chaos, emerged one of the most revered Central Bankers in the history of finance. Paul Volcker aggressively raised short-term interest rates, causing tremendous pain for the American economy, but in the process managed to finally tamp inflation back down. 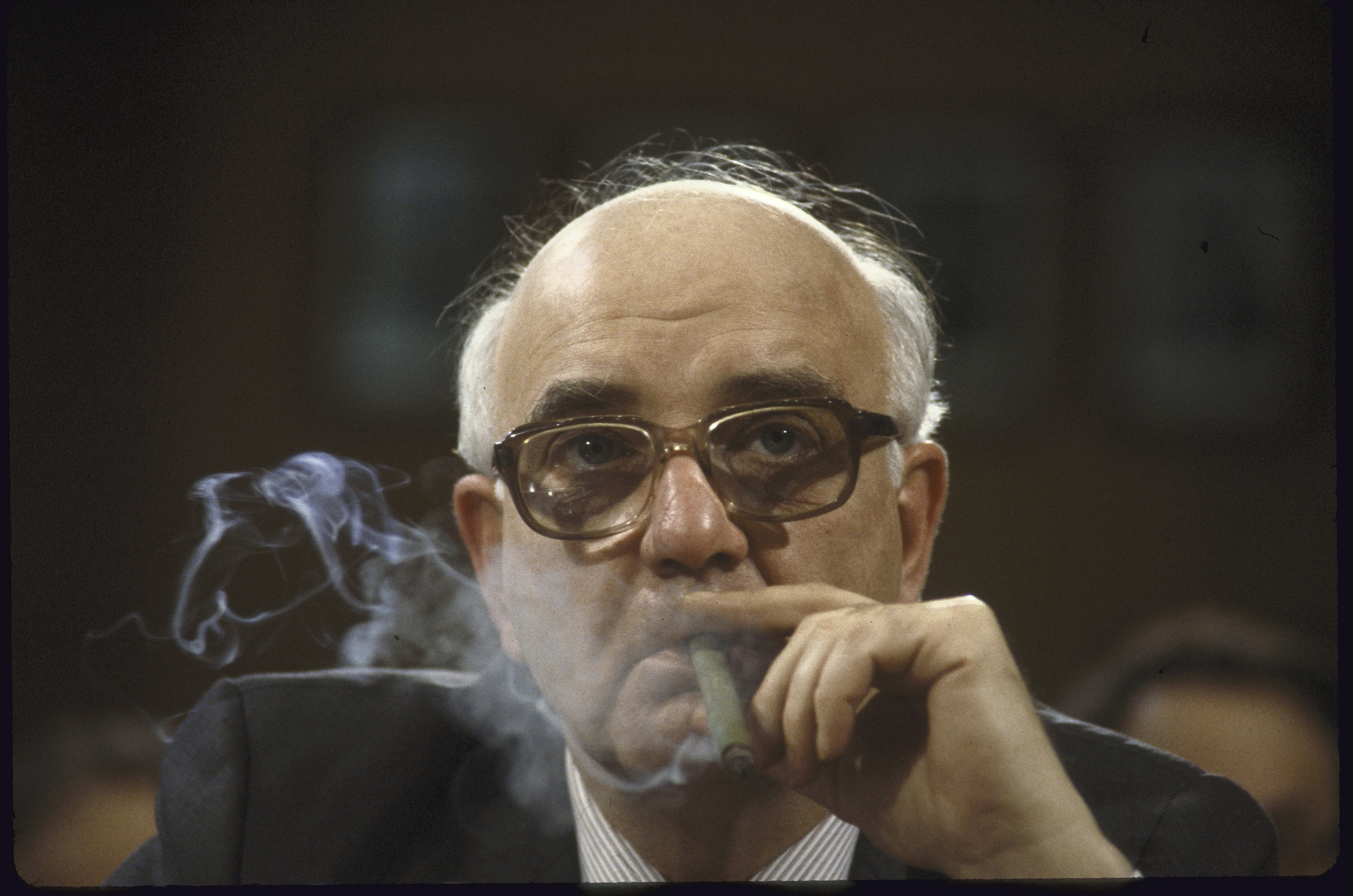 In doing so, he set the stage for the greatest bull market in financial assets the world has ever seen.

On September 30th, 1981 the US 10-year Treasury bond traded at a yield of 15.84%. Think about that for a moment. Risk-free government bonds were trading with a yield of almost 16%, and everyone was terrified yields were headed much higher. You couldn’t give bonds away. They were nicknamed certificates of confiscation.