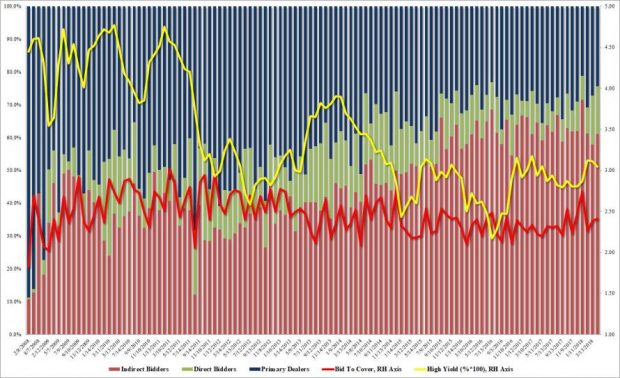 Treasury Sells 30Y Bonds At The Lowest Yield Since January

After two consecutive soft auctions, in the form of Tuesday’s mediocre 3Y, and yesterday’s very disappointing 10Y reopening, moments ago the US treasury sold $13BN in another 30Y reopening, which however saw a notable pick up in buyside demand, stopping at a high yield of 3.044%, stopping through the WI of 3.045% by 0.1 basis point. This was below last month’s 3.109% high yield, and the lowest going back to January’s 2.867% as a result of the recent sharp flattening in the yield curve.

The surprisingly strong auction on a day in which the 10Y has sold off drastically had strong internals as well, with the bid-to-cover of 2.41 higher than last month’s 2.38, and just below the 2.44% 6 month average. More importantly, Indirect Bidders finally stepped up their game, and took down 61.0% of the auction, up notably from 57.9% last month, if below the 62.8% 6 month auction.And with Directs at 14.6%, virtually unchanged from last month’s 14.8%, this meant that Dealers were also awarded less, or 24.4%, compared to 27.3% last month.

Overall, a strong end to a week of otherwise very disappointing auctions, even if it remains to be seen if foreign buyers are back for good, or if today’s modest pick up was just technical. 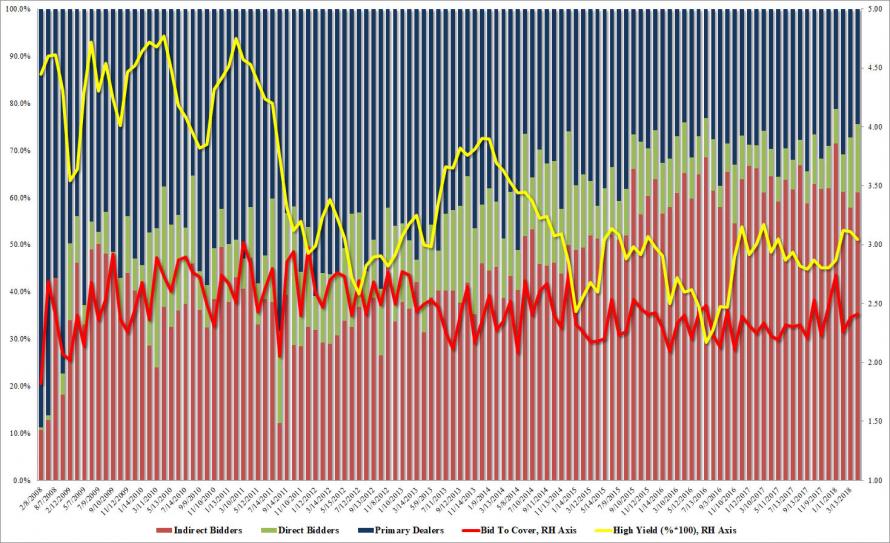