Us Dollar Gives Back Gains After NFP: Inflation Numbers On The Horizon

The big items on the macro-economic calendar for next week both take place on Wednesday, with March inflation numbers released early in the US morning and meeting minutes from the Fed’s March rate hike being released later in the day. We have one additional high impact USD print on the calendar for next Friday, with the April release of University of Michigan Consumer Sentiment Numbers. Next week also ushers in earning season out of the US as many US corporates release first quarter performance numbers.

Six Consecutive Months of Inflation Above 2%

In February, US CPI came in at an annualized 2.2%, making for the sixth consecutive month of inflation at 2% or higher. That 2% number is the Fed’s target, and this inflationary strength helped to bring the March rate hike, which we’ll get more context around when meeting minutes from the March rate decision are released next week. The big question around inflation is whether we get a seventh straight month of a read at the Fed’s target or higher and, perhaps more to the point, will it help to bring some element of a bullish response into the currency?

US CPI Since January, 2017: Six Consecutive Months at 2% or Higher 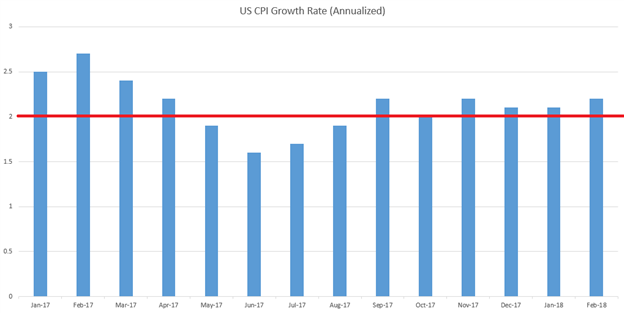 The US Dollar spent most of this week moving higher, continuing the gains that had started in the week prior as we closed-out Q1. After jostling around the 90.00 level for the first three days of this week, the Greenback caught a bid on Thursday after a really strong ADP payrolls report. But, Dollar Drops on Downbeat NFP: EUR/USD, GBP/USD Bounce From Key Supports, and the headline number printing at +103k versus the +188k expectation was enough to push DXY right back-down towards the 90.00 level.